Hiroki Ito is a well-known Japanese football player currently signed to the German league, playing as a defender for 5x Bundesliga winnger Stuttgart, Baden Wurttember based club VfB Stuttgary of the Bundesliga. At the same time, he is also a team player for the Japanese National Team. In a defender role, he is primarily positioned as the center-back for the team.

The Center-back for VfB Stuttgart, Hiroki Ito, began his pro journey with the Japanese club Jubilo Iwata back in 2018. Before joining VfB Stuttgart, Ito was in contract with the clubs like Jubilo Iwara and Nagoya Grampus. Also, he made his first presence for his country at the U17 level in 2015. The defender has played three games for the senior Japan national team so far. Moreover, he is one of the talented Japanese soccer players in the Bundesliga.

It's no doubt that Hiroki reportedly is one of the wealthiest and highest-earning Japanese players. According to our research, Hiroki Ito's approx net worth is between $1 million to $ 5 million, including all his cars, mansion, and properties. The 23-year-old Japanese defender is still in the early phase of their career. Despite his early start, he has a good taste of success. Like the other European footballers, he earns his pay figures in millions. Meanwhile, he has a trending market worth of €4.50million per the Transpfermarket, which is also his career highest. 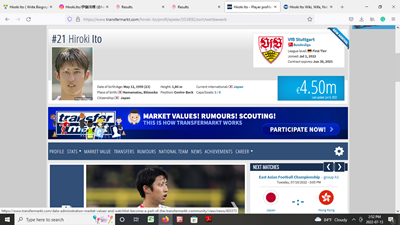 The present worth of Hiroki Ito SOURCE: Transfermarkt

When he signed a contract with Stuttgart, he agreed on a three-year deal worth €3,450,000. Now, Ito nets an astronomical wage of €22,115 gross per week and €1,150,000 gross per year. The club's yearly gross bill for the 2022-23 season is €12,140,000. All credit goes to his hard work and dedication. The former Jubilo Iwata man lives a lavish lifestyle from his soccer career earnings. Not to mention that Takumi Minamino remains the all-time highest earning Japanese player with a yearly salary of €73,910,00.

Apart from his club career, the athlete also gets a fund and bonus for contributing to his nation's football team. Besides football, he appears to make huge fortunes from his partnership with Brands, sponsorships, and endorsement deals.

Nike: Hiroki is endorsed by Nike. He is a Nike sportsperson frequently seen advertising its products on his social media outlets. Not only that, but Nike also facilitates him with high-quality football boots and jerseys. Regardless, the financial transaction between the two parties is still yet to be displayed.

When it comes to relationship subjects, the professional footballer is very confidential and suspenseful. Keep in mind that a Hamamatsu-born athlete is a very self-centered individual. He remains silent and prefers to stay away from the media limelight. Due to his low-key character, no facts or rumors about his relationship status are available on the internet; thus, as a result, determining his dating status currently seems very challenging.

Perhaps the former Joana youth international might be dating privately, and he might be waiting for the right time to reveal his Gf identity. He has never been with any partner or lady so far thus, Ito is assumed to be single presently. Indeed, his dedication and hard work toward soccer consumed most of his time. Therefore, Ito didn't get time for dating. We will soon revise our tabloids on this matter when it is available.

The former Nagoya Grampus star player Hiroki Ito was born and raised by Japanese parents. The player was born on 12 May 1999 in Hamamatsu, Japan, under the Taurus sun sign. Talking about his age, he is now 23 years old. Further, he is a right-footed center-back. The skilled player is of an Asian ethnic community and held a Japanese nationality card. Ito is a true Budhsim that practices Buddhism faiths and values.

He seems a very reserved person as he hardly opens up about anything concerning his matter to the masses.  As of now, there is no data on his early life, so it remains a mystery. Likewise, the defender Ito has kept his family members' identities hidden as their professions and names still stay everyone's curiosity. Behind public sight, his parents always have their back in every step of his life.

Have a look at Hiroki's professional career

Before joining the Jubilo Wata youth system, he trained to learn basic football techniques at two local football academies, such as Santos Academy Japan and Hamamatsu Kaba SSS. His actual football soccer journey started with joining the Jubilo Wata youth team. After passing through the Wata squad, he earned his promotion to its first team in 2018. After some, Ito signed his first official contract with Jubilo Wata agreeing on a major four-year deal. The 2018 AFC U 19 Bronze medalist netted four goals in overall 58 league matches in his Sophomore J league season. For your kind info, the Japanese defender made his pro J1 debut in March 2018. 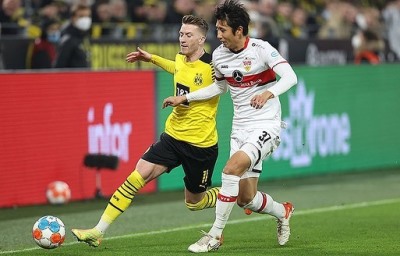 Unfortunately, the following 2019-20 season, the club obligated him on loan to another J1 League fellow club Nagoya Grampus. Later, he extended his contract till 2020. Everything was going oppositely as he thought. Ito was given very few chances to appear on the pitch, with just two matches in his two years tenure there. He was demotivated, but luckily, his career turned when he joined the Bundesliga club VfB Stuttgart in 2021 on loan. In his Bundesliga debut 2021-22 season, the right-footed appeared in 29 games, adding just a goal to his tally.

His consistency on the pitch has established him as one of the critical players for the team. With jersey no 21 on his back, he represented Stuttgart in various matches. Just a couple of months before, on 20 May 2022, VfB Stuttgart signed him until the end of June 2025.

Hiroko made his first appearance for Japan in 2015 at the U17 level. Since then, he has represented his nation at U18, U19, U20, and U23. From 2015 to 2018, he recorded 19 international matches for the team during his youth career. Furthermore, the rising footballer also led the Japan youth squad under his captaincy at various global tournaments and games. After his youth level in 2022, the Japan senior team recently called him for the senior Japan national team. 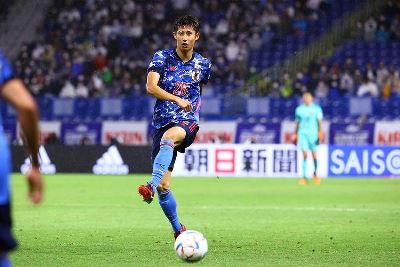 On 2 June 2022, Stuttgart jersey no. 21 made his international debut in a 4-1 win against Paraguay. To date, he has appeared in just three matches for the senior team. Moreover, he is also a probable player for the upcoming 2022 FIFA  World cup, which is happening in Qatar.

Hiroki Ito, the Japanese defender, is a systematic person that handles his social media rationally. He is available on various social media. But among these, he prefers Instagram, as he shares more of his life info there. With the username @Hiroki_ito38, Ito has a strong presence of 34K followers.

Via Instagram, he maintains updating his fans about his football life. In addition, Ito used his social media advantage to promote his brands and sponsors. And also, the ex-Japan youth international is one of the most explored athletes in his country.

You may read varieties of interesting news and gossip about popular players at Playerswiki.