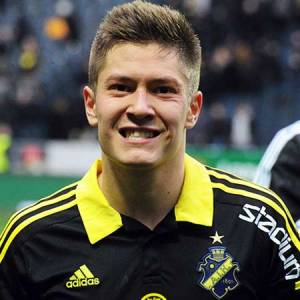 An Icelandic football right back, Haukur Heidar Hauksson is best known as Haukur Hauksson who currently plays for ALK in Sweden wearing the shirt no. 2. He previously played for Football club KA and KR.

Since, 2015 he is playing for his national side, “Iceland national team”, and has also represented Iceland U19 team and U21 team.

Haukur Hauksson was born on 1st September 1991, in Akureyri, Iceland. His birth sign is Virgo. Regarding his nationality, Hauksson is Icelandic.

He began his football career with his hometown football club, KA at the young age.

Haukur Hauksson's Net Worth and Endorsement

Haukur Hauksson has earned huge name, fame, and wealth through his professional football career. His significant source of earning is club contract, national team salary, and endorsement deals. As of 2018, the young footballer, Hauksson is signed to ALK football club where he gets paid $123,414 annually as his salary. His current market value is $620,055 whereas back in 2016 his market value was $744,066. His transfer fee seems to have decreased than the previous.

For the 2012 seasons, Hauksson signed to KR, a football club based in the capital, Reykjavik. He remained in the club till 2014 where he made 52 appearances and scored 3 goals for KR.

Following the Icelandic 2014 season, Hauksson signed a 5-year contract with ALK in Sweden on 24th November 2014.  Thus far, he has played 53 games and scored 5 goals for his native club, AIK.

On 19th January 2015, Hauksson made his international senior team debut in a match against Canada. He was also named to the team for Euro 2016. On 11th January 2018, Hauksson was called up for the 2 friendly matches against Indonesia along with Olafur Skulason, Arnor Smarason, and Frederik Schram.

So far, Hauksson has earned 7 caps for his national side.

Currently 26, Hauksson is neither single nor married, he is an open relationship with his gorgeous girlfriend Harpa Hauksdottir. His lady, Harpa is a professional makeup artist, currently works at Benefits Cosmetics. She attended International Makeup Center-IMC.

Hauksson and Hauksdottir often give public appearance together. Their Instagram is full of their adorable photos which they have captured while they were on romantic dates and spending quality times in their vacation, roaming in worlds mesmerizing holiday’s destination.  It seems that duo is pretty serious about their relationship and might take their relationship to next level some day.