Hashim Mohamed Amla or Hashim Amla is a South African professional cricketer who plays as a right-handed batsman for his national side in all three formats of the game. He is considered as the greatest batsmen in not only South African cricket history but also, through the modern cricket world.

Amla has also captained for South Africa across the cricket three formats which are Test, One Day and Twenty 20.

Hashim Amla’s Net worth and Salary in 2019

Hashim Amla has an estimated net worth around $50 million as of 2019. His annual salary is estimated at around $ 2.5 million which he is reported to earn from South Cricket. 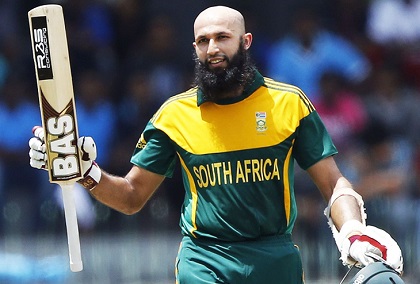 A talented and prolific run-scorer for South Africa has earned a good amount of deal from playing professional cricket at the highest level.

He owns a four-bedroomed R12.5million penthouse, complete with private swimming pool at the Saxony Sibaya.

Amla is married to his wife Sumaiyah Amla. The couple had an arranged wedding they knew and had seen each other a few times earlier.

His wife Sumaiyah gave up her schoolteacher job after the marriage to be with her husband's family.

Amla was called as terrorist by Amal has taken a catch against Sri Lanka on 7 August 2006 in a Test match.

This gesture drew a lot of ire from South African media and fans that ultimately led to his termination with the channel.

He later apologized to  Hashim Amla for the unfortunate incident. Talking about his love life, he is currently married to his wife, Sumaiyah and is blessed with two sons, born in 2012 and 2013.

Hashim Amla is of South African. He was born to a Muslim Ansari family having roots in Gujarat. India on 31 March 1983 in Durban, Natal, South Africa. Amla was sent to Durban High School that has produced great cricketers such as Lance Klusener and Barry Richards.

He made his debut for South Africa at the test level against India at the Eden Gardens on 28 November 2004. Amla scored his first test century against New Zealand on 27 April 2006 in Newlands Cricket Ground, Cape Town.

He went to make the highest test batting score of 311 not out against England on the Oval on 19  July 2012, it was also the first triple century scored by a South Africa in their test history. Amla made his one-day international debut against Bangladesh on March 2008 and scored his first international century against the same opponent at Benoni, South Africa on 9 November 2008.

He has played for Twenty 20 teams such as Trinbago Knight Riders and Kings XI Punjab. For his outstanding performances, he was named alongside Tillakaratne Dilshan, fellow South African teammate AB de Villiers and Imran Tahir in the 2015 World ODI XI team.