Haley Jones is picking up the pace as she garners a lot of attention for her amazing basketball skills. Currently, she is showcasing those skills as the number 30 Guard for Stanford Cardinal women's basketball. At such a young age, she has been named the All-Pac-12, WBCA High School Player of the Year, Morgan Wootten National Player of the Year, and more. Besides, in 2021, she became the finalist of the Cheryl Miller Award.

Hailing from the suburbs of Santa Cruz, California, Haley Jones was born in 2001. She celebrates her birthday on the 23rd of May every year. She was raised in a family that has a history in basketball.

Her father, Patrick Jones, is a former Colorado College player, whereas her mother, Monique Jones, used to play basketball for Metro State. Apart from her parents, she also has a brother named Cameron Jones. Furthermore, her cousin, DeLisha Milton-Jones, is also a pro basketball player who has won two gold medals at the Olympics and FIBA World Cup.

As for her academics, she graduated from California-based Archbishop Mitty High School in 2019. As of now, she is enrolled at Stanford University.

As most of her family members were into basketball, Haley Jones also followed the same path. She quickly developed an interest in it and began playing more seriously. When she joined high school, she joined its women's basketball team too. 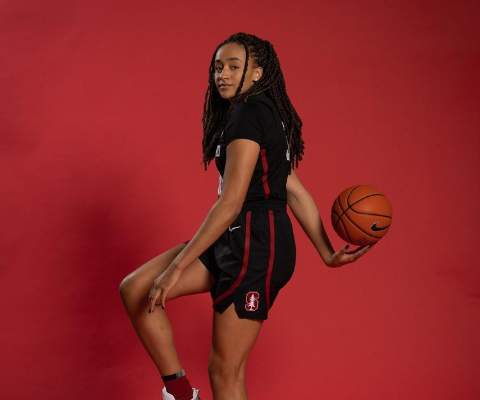 While playing for her high school team, she showed incredible gameplay and impressed everyone. As a freshman, she played in 27 games and averaged 6.1 rebounds, 2.7 assists, 10.0 points, 1.4 blocks, and 1.3 steals to help her team attain a 23-4 record and reach the CIF Open Division first round.

As she moved from freshman to sophomore to junior, she maintained the same gameplay and took her team to the next limit. She was named the number one player in the country by different sports media, including ESPN HoopGurlz and Prospects Nation.

Later on, she participated in the trials to play for the Under-19 and Under-17 national women's basketball team. She got selected at different times for different teams. However, the most significant moment came in July 2018 when she won a gold medal with the United States at the FIBA U17 World Cup.

After that event, she continued to play for her high school team and took a farewell after graduating in 2019. Afterward, she joined Stanford University and its women's basketball team, Stanford Cardinal. And, even though the teams changed, her performance didn't.

Stanford Cardinal sophomore forward Haley Jones, who was recently compared to former NBA star Magic Johnson by Stanford coach Tara VanDerveer, has certainly performed brilliantly for the teams that she has played. Considering her stats and the accolades she has earned, it must be sure that she has earned some healthy sum too. So, how much is her net worth? Sadly, nothing can be said as her earnings and net worth is still under review.

Most Outstanding Player of the 2021 NCAA Tournament Haley is possibly single and isn't dating anyone as of this moment. Likewise, there is no information that reveals that she was in a relationship in the past.

It can be assumed that she is currently focusing more on improving her tactics to be a successful basketball player.