Guilherme Arana the the Brazailan international is a professional associational soccer player. He serves as a left-back for the Brazilian club Athletico Mineiro and the Brazil national team. He wears jersey number 13 for his team. Sevilla, Atalanta, Corinthians, and Athletico Paranense are the former clubs he played from 2014 to 2020.

Guilherme was born under the full name Guilherme Antiono Arana Lopes on 14 April 1997 in Sao Paulo, Brazil, with an Aries zodiac sign. He is 25 years old now. The player stands tall at 5 ft 9 inches and weighs over 68kg. His athletic body stature and strength have nursed him in his game form. To your knowledge, he is the 2020 Tokyo Olympic Gold Medalist.

Insight into his early life and family facts

Guilherme Arana, the 2021 Bola de Prata 2020 winner, is born of Brazilian ancestry parents. His father's name is Augusto Lopes, whereas his mother is Cinita Arana. There is no information on their job. He was born into a medium family background. To be noted, the Guilherme family is a family of six. He has a brother named Gustavo Arana, Felipe Arana, and Victor Arana.

He has mentioned his family photos online. We can access it on his Instagram account under the username @guiarana. Guilherme also often says his family assistance on his soccer carer in various interviews.

Does he have any children? Marital status

The left-back is the beloved and romantic husband of his charming wife, Gabriela Melchoir. She also has a huge fan base of 58.5 k followers on her Instagram @gamelchoir. Well, it's challenging to find out it's dating, as the couple has not spoken about it. Notably, the couple walked down the wedding aisle a few years back. Both of them share thier pictures with the masses about their personal life. 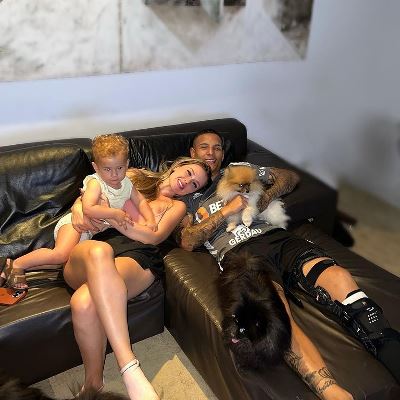 With Gabriela, he has an adorable son name Guilherme Jr born on 11 April 2021. Guilherme is the proud dad. We can see his Instagram feeds full of his son's snaps. The pair are enjoying their parenting and raising thier son very well.

Guilherme's wherewithal and net worth

As reported by Salary Sport, Guilherme Arana, the 25-year-old Miniero defender, has an estimated net worth of around £3,632,200. He makes most of his earnings from playing for the soccer clubs. Playing for Mineiro, £7,28,000 is his yearly wage, and £14,000 is his weekly. With that pay, he is one of the highest-paid footballers in Mineiro. Previously at Sevilla, he even netted an astronomical salary of £1,352,200 per annum. All credit goes to his hard work and passion for football. He is living his best luxurious lifestyle. His market value at present equals €14 million; the highest worth till now as listed on 6 April 2022. Further, Elenka Sports Ltda is the agent that carries out all his soccer signings and contract. Despite being a footballer, he is also sponsored by a beauty product called Nivea Man. He is a brand ambassador and is seen advertising its product on his social media fora. Not only that, the Brazilian is an Adidas sportsperson. Hence, working with such brands effectively credit his bank balance, but the real financial incentive he gets is still under the radar.

Wiki review on his club and international career

Sao Paulo-bor player played his youth carer for Corinthians from 2005 to 2014. Professionally, he only set foot in high-level competition as a Corinthians first-team player. After three years, he joined fellow club Paranaense in 2015, playing just three games. So finally, he joined Sevilla in 2018, but unfortunately, he was loaned to the Serie B club Atalandta until 2020. Later, he joined Atletico Monier in 2020 with an option signed to buy on 29 January 2020. After a year, he agreed on an 18-month loan deal on 29 Jan 2022, Mineiro. He has registered 44 league games with three goals in his name. 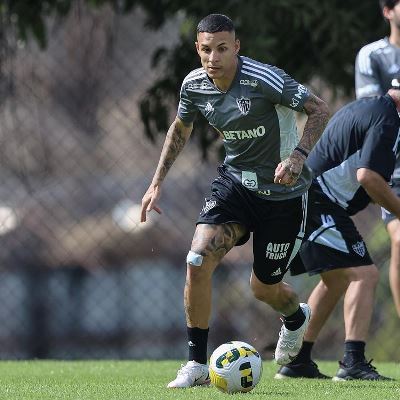 Guilherme, the former Brazilian international at U 20 and U 23, has done much for his nation. After his U23 performance, he got his first call in the senior squad on 14 November 2020. His debut match came in the world cup qualifiers on 7 October 2021 against Venezuela.