Guido Migliozzi is a rising Italian professional golf player. He has been playing professional golf since 2016. Guido currently plays in the European Tour and starts his career playing in the Challenge Tour and Alps Tour. Miglozzi has already won five professional events, including two European tours and three others.

Guido Migliozzi was born on January 25, 1997, in Viczenza, Italy. He is among the four children born to his parents. Guido has three sisters. Migliozzi has not shared a word about his parents and siblings with the public. Talking about his physical appearance, Guido stands five feet and eleven inches tall and weighs 75 kg.

Guido Migliozzi has an estimated net worth of more than $2 Million. A golf player does not need to win an event to earn money. They are paid based on their scores at the end of the event. Also, they earned a hefty sum through their endorsement and advertising deals. Guido is very much early in his career and shall be making millions in the future. 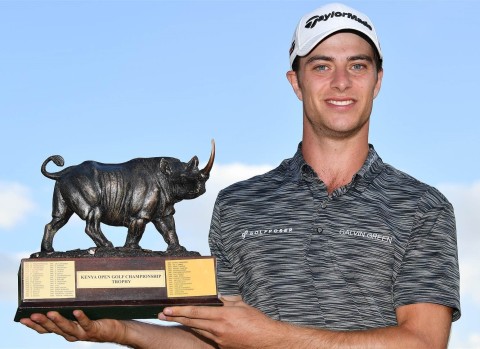 Guido, along with his Kenya Open Title SOURCE: Golf Monthly

Guido has earned much of his net worth through his European tour career. He played in just two events in 2018 at the European Tour and earned €9,050 as the prize money. In 2019, Migliozzi played in twenty-eight games and made cuts in eighteen of them. He finished the season taking home €845,370 accumulating 1,499.3 points. Last season, The Italian golf player played sixteen games and made cuts in just six and earned €132,577. Thus, he officially crossed his million earning marks on European Tour.

In the ongoing season of 2021, Guido has played in twelve tournaments and already earned €949,920 as his prize money. Totaling his career making from the European Tour, it sums to €1,936,918.   In June 2021, Migliozzi was part of the US Open Championship, ended the event at No. 4, and earned $498,176. Thus, he is very much early in his career and shall be making millions in the future.

Guido Migliozzi is involved in a romantic relationship with his longtime girlfriend, Marta Cozza. The love birds have been together for more than two years. He has not shared a word about his girlfriend in public. However, both of them are active social media users and keep sharing many pictures of them. Guido along with his girlfriend, Marta, at a vacation SOURCE: [email protected]

Guido and Marta keep visiting famous holiday destinations around the globe. They must be planning for a beautiful and lavish wedding ceremony shortly.

Guido turned professional in 2016 and started his professional career with Challenge Tour. He also joined the Alps tour and won three events, once in 2017 and twice in 2018, and lost the 2018 Alps de Las Castillas in a three-person playoff. In 2019, Migliozzi earned his European Tour card and won the Magical Kenya Open in his rookie year.

In 2019, Guido won the Belgian Knockout and entered the top-100 of the world rankings. In June 2021, Migliozzi finished his first US Open Championship at the No.4 position.