Luke List is a well-known American golf player who has been playing professional golf since 2007. He competes on PGA Tour. In his thirteen years of professional career, List has won two major titles of Korn Ferry Tour. As of early 2021, Luke ranks at 45 among the active professional golfer.

Luke List was born on January 14, 1985, in Seattle, Washington. He is among the three children born to Bonny List and her husband, Mark List. Both of his parents were All-America Swimmers. His mother was a Pan-American gold medalist and is in two Halls of Fame, and his father was swimming for the University of North Carolina. He has two sisters Bekah and Sarah, who are also college swimmers. His father passed away in 2015.

Luke List Net Worth and Career Earnings In Millions

Luke List has an estimated net worth of more than $8 Million. He has accumulated most of his earnings through his successful career in golf. The golfer has played 177 events to date, in which he made it to the cut out in 91 events. He did not have an excellent start to his career but has been earning million lately. 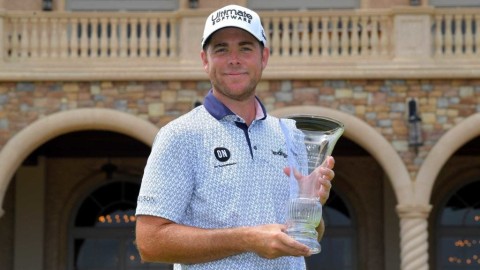 List earned more than $2.7 million in the 2017/18 season. This remains the highest-earning in his career to date. He must be making a considerable sum through his sponsorship, advertisement and endorsement deals.

Luke List is a private person but has shared some details about his relationahip status. He is a married man. Luke tied his wedding knot with his longtime girlfriend, Chloe Kirby, in March 2016. The duo had been dating each other for several years before exchanging their wedding vows.

Soon after the wedding, The love birds welcomed a new member into a son, Ryann List. Chloe is an actress. She is very much early in her career and has not made it to the big screen. Kirby is a regular visitor to her husband's games. The family of three is living a happy and blissful life.

Seattle Native Luke started playing golf from a very early age. He was ranked among the top amateur golfer in the United States. List was the runner-up at the 2004 U.S. Amateur. After this event, Luke played in the 2005 Master, where he finished T33 and recorded an ace during the Par 3 Contest. The same year, He won Jones Cup Invitational.

Luke turned professional in 2007 after graduating from Vanderbilt University. He had some downs in his early days. The golfer qualified for the PGA Tour in 2013 and had some good time. After since He has been a regular player in sports. He has won two major professional wins in his career and ranked in the top 50.