Grayson James Allen a.k.a. Grayson Allen is a professional basketball player who is currently signed to the Memphis Grizzlies of the National Basketball Association (NBA). He was picked by the Utah Jazz with the 21st overall pick in the 1st round of the 2018 NBA Draft.

Born on October 8, 1995, Grayson Allen finished his collegiate career at Duke University and high school at Providence School of Jacksonville. Jacksonville, Florida native, he is an American by nationality who came from a white ethnic background.

Grayson James Allen is a rising player in the present era.

Grayson Allen Personal Life; Who is his Girlfriend?

For those of you who don’t know, 6 ft 4 in (1.93 m) tall hunk, Allen is currently in a relationship with his girlfriend, Morgan Reid. They might have met during their college days, as both attended Duke University, where Reid played soccer. Currently, she played for the Orlando Pride. 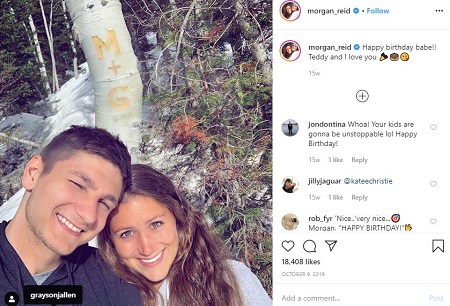 Matter of fact, Allen has not shared any picture with his lady on his socials. On the contrary, Morgan Reid often post pictures with her beau.

Grayson was born on October 8, 1995, in Jackson Ville, Florida, the United States. He is the son of William Allen (Father) and Sherry Allen (Mother). He is an American belonging to the white ethnical background. His zodiac sign is Libra.

Grayson James Allen is a young lad who is shining day by day by his incredible talents. At present, he has been one of the players to be noticed. Talking about his education, he first attended Providence school in Jackson Ville, Florida. There he was a leading player for the team.

Afterward, in 2014, Grayson enrolled at Duke University where he was named to the All-Academic team.

In that respect, he became a major contributor in the playoffs. Likewise, he played in the 2015 NCAA Men’s Division I Basketball Championship Game before playing in ACC as an offensive player. Including his great gameplay, late he became the best offensive player in the ACC and was named to the Associated Press pre-season All- American Team; ACC Player of the Year.

Allen was picked with the 21st overall pick by the Utah Jazz in the 2018 NBA draft, on June 21, 2018. Further, penned his rookie scale contract with the Jazz, On July 2, the same year. Upon arrival, he joined the team alongside Tony Bradley, Dante Exum, Kyle Korver, and Royce O'Neale.

On 22nd October 2018, the hunk made his NBA against the Memphis Grizzlies scoring 7 points in 11 minutes off the bench.

keep In Touch With Playerswiki