Chesapeake, Virginia native, Grant Holloway was born on 19th November 1997, under the star sign Scorpio. He is the son of Stan and Latasha. Further, he was coached with his elder brother, Trey by their dad in track and field until high school as members of the Track 757 club. The brothers also played football as a wide receiver at  Grassfield High School for the Grizzlies.

How Much Is Grant Holloway's Net Worth In 2021?

Instead of million-dollar game football, Grant Holloway made a rare choice of the track field. But he is happy with his decision.

Unlike other sport, track and field salaries are not always public, sponsorship deals are more difficult to earn and vary among the talent and event group. According to the source, a professional track runner with no major sponsors can make as little as $5,000 to $6,000 per year.

Grant Holloway is in a relationship with Katie Cronister for a long time now. On 3rd August 2020, he shared a picture of them via Instagram telling the world they have already shared three beautiful years together. 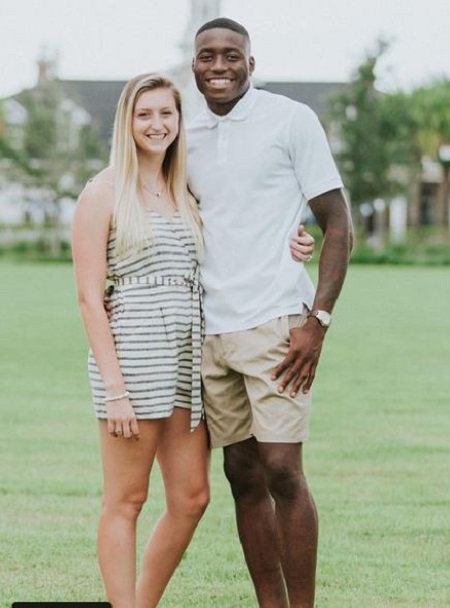 He wrote, "These past 3 years has not been all sunshine and rainbows, but thank you for growing with me & lighting up the room with your cute ass smile. I just want to say, when I picture myself happy, it’s with you. Like you said before I’m non-refundable lol. Thanks for all you do. We Celebrate"

Katie Cronister is a Gator softball pitcher who graduated from Florida in December 2018.

Turned professional in 2019, Holloway recorded the 60 m hurdles world record on 24th February 2021 at the World Athletics Indoor Tour in Madrid, beating the 27-year old world record of 7.30 s Colin Jackson by one-hundredth of a second.

Earlier, Holloway matched his American record of 7.32 s in the heats, already the #2 all-time performance going into the meet, before winning the final in 7.29 s. His victory in the final also made him the overall winner of the 2021 World Athletics Indoor Tour in the 60 m hurdles.

On 10th April, Holloway made his outdoor debut at the Miramar Invitational in Miramar, Florida, winning the 110 m hurdles final in a windy (+2.2 m/s) 13.04 s, his fastest opening performance in the event.