Graham Robert Rahal is an American race car driver. Currently, he participates in the Indy Car Series with Rahal Letterman Langan Racing, a team part-owned by his father Bobby Rahal, the winner of 1986 Indianapolis 500.

He has an estimated net worth of $5 million. He married Courtney Force, a retired drag racer.

Graham Rahal was born on January 4, 1,989 and Columbus, Ohio, the United States was his birthplace. He is 30  years of his age. He is of American nationality and belongs to white ethnicity. His birth sign is Capricorn.

He is the son of Bobby Rahal and Debi Rahal. He also has siblings and they are Isabella Rahal, Jarrad Rahal, and Ava Rahal.

He attended New Albany School and graduated in June 2007. Later after that, he attended Denison University.

In 2005, he won the Formula Atlantic class at the SCCA Runoffs and finished fourth in Star Mazda series standings. He moved to a full-time ride in the Champ Car Atlantic Series in 2006, where he won five races and finished second in the season standings.

He also drove in the Indy Pro Series event on the Indianapolis Motor Speedway road course in conjunction with the 2006 United States Grand Prix and finished second. He debuted in 2008 and became the part of Indy Car Series.

Since 2008, he has been participating in several race and games and bags countless medals and trophies for his country. She achieved a lot and has to accomplish more in his professional career. 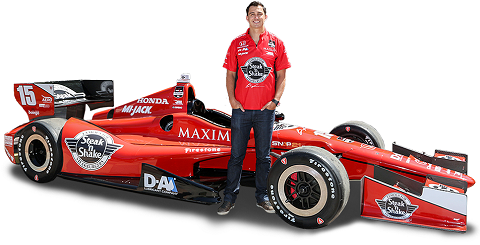 Rahal is a successful entrepreneur. He owns Graham Rahal Performance, an automotive tuning and parts shop in Brownsburg, Indiana. He is also the partner of Bobby Rahal Automotive Group, a network of car dealerships in western and central, Pennsylvania.

He is a married man. He married Courtney Force, a retired drag racer. She drove the Advance Auto Parts Chevy Camaro SS Funny Car for John force racing. The lovely couple celebrated their married in 2015.

Courtney, you’ll never know the influence you have had on this world, the amount of people and children that admire your class and dignity forever and will always want to grow up to be like you. Success isn’t measured by wins, it’s by the person you are, and you my dear are an amazing woman. You came, you beat the boys, you carried yourself with modesty and class even in times when it’s hard to bite your tongue. I’ll never be able to tell you in words how proud I am of you, and how much I look up to you. I can’t wait for the next chapter of your life, our lives, and to see what you will accomplish next. . . Most of all, remember this, no matter where life may take you, I will always be by your side, and will always have your back. Love you babe. Congrats on one heck of a career. 🏁😘 . . 📸 - @rebilasphoto

He is the philanthropist. He established a Graham Rahal Foundation in 2009. The objective of the organization is to support Alex's Lemonade Stand for Childhood Cancer and The Association of Hole in the Wall Camps.

Outside of his career, he is the supporter of Columbus Blue Jackets, Cleveland Indians, Cleveland Cavaliers, and Ohio State.

The American race car driver Graham Rahal has an estimated net worth of $5 million. As of 2019, he receives a salary of $361,129. Moreover, he also made a fortune of earnings from his automotive business.

His father Bobby Rahal is a former auto racing driver and team owner, who has an estimated net worth of $80 million.