Goncalo Ramos: His Journey to the 2022 FIFA World Cup and World Cup Hat-trick

Hat tricks are few and far between, and Goncalo Ramos scored the first hat trick of the 2022 FIFA World Cup. So far the only hat trick in the 2022 World Cup. Ramos netted three goals in Portugal vs. Switzerland match. Likewise, the Portuguese team won the game by a landslide, 6-1 on the scoreboard.

Goncalo started his career in the main Portuguese national football team in 2017. And since his start, Ramos has been a mainstay in the squad until he reached Portugal's primary soccer team. The talented footballer joined the senior Portuguese team in 2022 for the FIFA World Cup. And in the said FIFA tournament, Ramos netted his first World Cup Hat Trick.

Goncalo Ramos started his international career in the Portuguese Under-17 Team!

Goncalo Ramos started his journey in soccer at an early age. And he found a platform in the Olhanense FC in his youth career. Ramos later ended his youth division at Benfica FC. 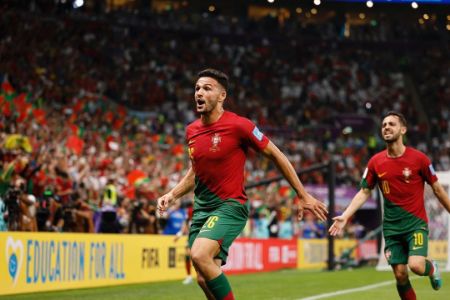 Goncalo Ramos is the only player to make a hat trick in the 2022 FIFA World Cup. SOURCE: [email protected]

While playing for Benfica, Goncalo debuted in Portugal's national Under 17 team. And Ramos kept moving with his career till he last played as a member of the Portuguese U21 team. Finally, his time to shine came when he became a part of Portugal's National Football Team.

As a member of the Portuguese squad, Goncalo scored three goals in the 2022 FIFA World Cup. However, the hat trick he netted brings the spotlight to the young soccer star. Ramos scored the hat trick in their match in the Round of 16.

Goncalo's first goal came in 17 minutes after the kickoff. Likewise, Ramos then netted another goal in the 51st minute. And sixteen minutes later, the young Portuguese scored another goal, earning his first FIFA World Cup hat trick. And currently, the only hat trick in the 2022 FIFA World Cup.

Ramos Netted a Hat Trick in UFEA European U-19!

Before his name became famous, Goncalo Ramos started his international career in the Under-17 Portuguese team. Likewise, his first appearance was in the 2018 UFEA Under-17 Championship. And Romos scored his first international goal against Slovenia. 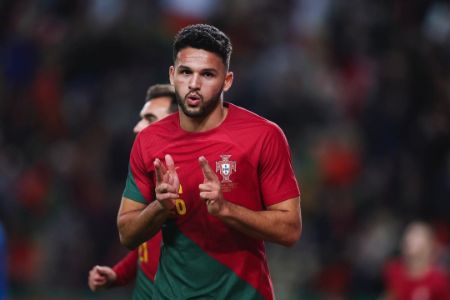 The following year, Ramos netted his first international hat trick. In the 2019 UEFA European U-19 Championship, Portugal faced off against the Republic of Ireland in the semifinals. The Portuguese team won the match with a score of 4-0. And Ramos netted three goals out of the four.

And by 2020, Goncalo had started his senior division and joined the U-21 Portuguese team. Ramos earned his first cap on November 12, 2020. And in his debut match against Belarus, he managed to kick in a goal ending the game with three nil.

Sadly, the Portuguese squad couldn't bag the 2021 UEFA European U-21 Championship. However, Portugal became the runner in the said tournament. And on a more recent note, Ramos became a senior team member, replacing Rafa Silva. Similarly, on November 10, 2022, Goncalo became one of the 26 men to play in the 2022 FIFA World Cup.

What's next for the young Goncalo Ramos?

After accomplishing the hat trick, Goncalo Ramos put his name on the market. And as such, many well-known clubs might want the young talent under their banners. And this begs the question, will Ramos stay with Benfica FC, or will he opt to transfer in the upcoming transfer window? 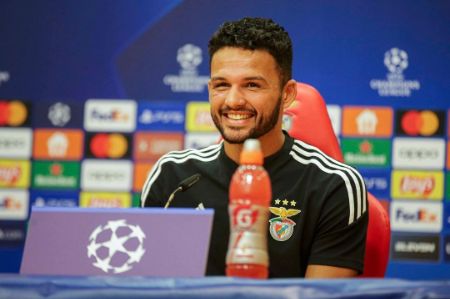 The Portuguese football has earned quite the fame after his adventure in the 2022 FIFA World Cup. As such, his career as a footballer will surely grow. Ramos currently plays in Benfica's primary team. However, for three years, from 2019-2021, Goncalo played in the second squad, Benfica B.

After displaying his skills in the 2022 World Cup, top brace clubs like Barcelona, Manchester United, and others set their eyes on Goncalo. However, the steep price tag of 120 million euros or 103 million pounds became a strong deterrent. Currently, the Portuguese club Benfica holds all the cards. And Ramos had signed a contract that binds him to the football club till June 2026.

As seen in the 2022 FIFA World Cup, Portugal opted to replace Cristiano Ronaldo from the starting eleven. With Manchester United recently ending their contract with Ronaldo, they will likely pick Goncalo Ramos as his replacement. However, as mentioned earlier, Ramos has a steep price tag, while Man United paid £12.9 million to sign Ronaldo.