Goncalo Matias Ramos, aka Goncalo Ramos, is a professional association footballer from Portugal playing for Benfica as a forward. The Portugal striker is a young rising player who initially played for Olhaneses in his youth period.

The Benfica younger forward, Ramos, was born in the beautiful city of Southern Portugal called Olhao on 20 June 2001. Presently, he is just 20 years old, and his zodiac sign is Gemini. He is a right-footed footballer and wears jersey number 88.

The Portugal international possesses a good height of 6 ft 1 inch and weighs over 79 kg. Further description, he has short black hair with light brown skin complexion.

Born Olhao, the Portugal young forward kicked off his football career in the youth ranks of local club Olhanense in 2009, playing for three straight years. After that, he moved to Club Loule, and in 2013, he joined the Benfica reserve team. 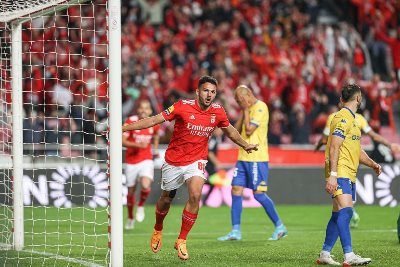 On 13 January 2019, he made his professional Benfica debut against Braga B in Liga Pro. Ramos has appeared in overall 65 games for Benfica, adding 26 goals to his tally. The Portuguese forward is a talented player; he has a bright future if he keeps on performing as he does now.

The Portugal native has been representing his country at various international levels. Ramos was called up for the first national squad in 2017 for U17. Afterward, he has been consequently for Portugal at different ages. Asof 2022, he has played in 42 games sending 21 balls behind the net.

2019 UEFA European U-21 golden boot winner Ramos has set into football just for a while and is in the initial phase of his football career. He is still yet to earn millions in the future. However, he makes a staggering annual salary of €4,26,400 as a Benfica player.

Nike, the clothing and footing brand, is one of the sponsors that pay a handsome amount of money to him, which has also boosted his net worth. It facilitates him with boots and kits too. Thus, as per sources, he has a net worth of about $2 Million. According to Transfermarkt, he currently holds a market value of €10 Million. The Portuguese international Ramos still has a chance to grow their value. It will significantly increase as per the game, performance or form he is in.

Is Goncalo Ramos dating anyone?

The Portuguese rising forward is not involved in any relationship with any girls. Ramos has kept his private life very low-key. Rather than dating, he is too focused on his football career.

Observing his posts on Instagram, we can judge how dedicated and disciplined he is towards his career at the moment. We will update you on this as soon as possible.