Matthew NeSmith is an American professional golfer who is currently playing in the PGA Tour. Turned professional in 2016, he previously competed at Korn Ferry Tour and PGA Tour Canada. He finished his collegiate career playing for the University of South Carolina.

How Much Is Matthew NeSmith's Net Worth In 2022?

It's been seven years that NeSmith turned pro and has earned a good deal of money from his ever-growing golf career. No to mention, the pro golfer is paid a percentage of the purse for each tournament they play in and finish in the money. Like other athletes, sponsorship and endorsement is another important source of income for the golfer.

To date, Matthew NeSmith has summoned a career earning of $3,018,307 from PGA. Soley in 2022, he summoned $832,711 as of March. What's more, the golfer is sponsored by Srixon Golf, Vineyard Vines, FormFree, ProVital Solutions, Adidas Golf, and KJUS Golf.

From Junior Heritage To PGA Tour

Named 2010 Male Athlete of the Year by the Greater Augusta Area Sports Council, Matt qualified for the 2011 U.S. Junior and finished 10th in the stroke-play portion. Medalist in 2009, 1010, and 2011 South Carolina Region 4A Championship. One of four junior golfers to receive the prestigious Byron Nelson International Junior Golf Award in 2012.

After high school graduation, he enrolled at South Carolina University where he played for four years varsity of golf. While in University, he 2016 PING All-American First Team, 2015 SCGA Player of the Year, 2013 PING Honorable Mention All-American, and many more.

Turned professional in 2016, NeSmith soon joined Korn Ferry Tour. On the 2019 Korn Ferry Tour,  he won the Albertsons Boise Open and secured his PGA Tour card. Following the first round, he held the lead at the 2021 Phoenix Open. He finished the tournament tied in seventh.

Matthew NeSmith is married to his long-time girlfriend, Abigail Pait. The couple started dating in 2013. In March 2018, NeSmith proposed Abigail Pait on the 18th green at the RBC Heritage. He had bought the engagement ring several months earlier and although he says he’s not the most creative guy in the world, he concocted a plan.

She said, yes, of course, and the two tied the knot on November. 1, 2019, during a break from his fourth and fifth tournaments as a card-carrying PGA TOUR member. Their wedding was held at an Augusta church where three other generations of his family have also said their vows, the first wedding was in 1899. 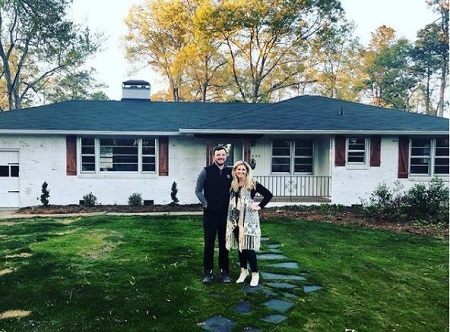 Matthew NeSmith and his wife posing in front of their new house SOURCE: Instagram @knedsmith

Soon the couple scored their first house in Aiken, South Carolina. The golfer shared the news via IG, "No April Fools here #FirstTimeHomeOwners."