Giovanni Vincenzo Infantino well recognized as Gianni Infantino is a Swiss-Italian football administrator who currently stands as a president of FIFA, a position he held since 2016. Intially, he was elected during the 2016 FIFA Extraordinary Congress on 26th February and re-elected on 5th June 2019. Moreover, he is a member of the International Olympic Committee, elected on 10th January.

Brig, Switzerland native, Gianni was born on 23rd March 1970, under the star sign Aries. The fifty-year-old holds a dual nationality: Swiss and Italian.

How Much Is Gianni Infantino Net Worth In 2020?

Gianni Infantino has always remained silent when it comes to his financial aspects. The much-publicized salary of him was 1.5 million Swiss francs ($1.53 million) with no bonus in 2016, seeking to end a distracting issue of his first six months in office, when he signed a contract in 2016.

Also, he received a chauffeured car, his lodgings paid, plus monthly expenses of 2,000 Swiss francs ($2,040). In 2017, his bonus would be eligible under a new compensation policy being drafted by FIFA. 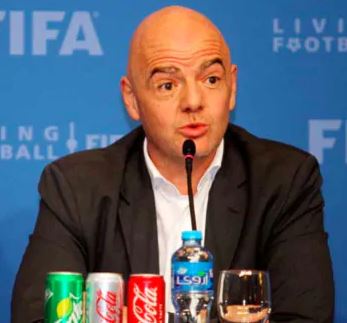 In 2019, he resigned with FIFA but does not discloed the contract and salary. As of 2020, the estimated salary of the president of FIFA, Gianni Infantino is $3 million.

Infantino tied the knot with his Lebanese girlfriend Leena Al Ashqar with whom he now shares four daughters: Alessia, Sabrina, Shanïa Serena, and Dhalia Nora. His wife has been an employee of the UEFA legal department since 2014. 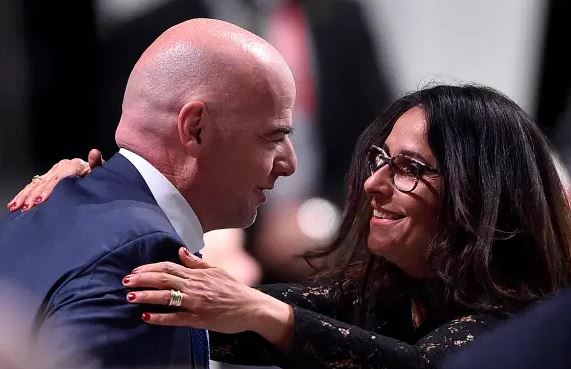 Gianni Infantino and his wifey SOURCE: The Sun

Besides, the couple has not shared much of their personal stuff to the public. Nevertheless, they can be seen together in attending events. Most prominently, Leena was spotted kissing her husband after Gianni won the FIFA presidential election during the extraordinary FIFA Congress in Zurich on February 26, 2016.

Gianni Infantino was born to Italian parents from Lombardy and Calabria. He is a graduate of the University of Fribourg where studied law. He is bilingual who is fluent in Italian, Spanish, and German as well as also speaks English and Arabic.

Infantino began his career working for the University of Neuchatel as the Secretary-General of the International Center for Sports Studies (CIES). In 2000, he joined the UEFA, and later four years, he was appointed the Director of UEFA's Legal Affairs and Club Licensing Division.

In 2007, he was appointed Deputy General Secretary of UEFA and Secretary-General in October 2009. What's more, Gianni oversaw the expansion UEFA Euro 2016 to 24 teams and played a role in the conception of the UEFA Nations League as well as the UEFA Euro 2020, which will happen in thirteen European nations.

A former member of FIFA's Reform Committee, Gianni received the backing of the UEFA Executive Committee to stand for the president in the 2016 FIFA Extraordinary Congress on 26th October 2015.

The rest, as they say, is now history.