Gia Grigalava is a well-known Georgian professional football player. He is currently playing at the Russian premier league for Khimki FC. Gia turned professional in 2007 with Rostov in the Russian league. Grigalava plays as a center-back for his club and country.

Gia Grigalava was born Gia Aleksandrovich Grigalava on August 5, 1989, in Kutaisi, Georgian SSR. He is the son of Aleksandr Grigalava and his wife. Much about his parents and his early life is under the radar. Gia stands six feet and three inches tall and weighs 85 kg.

Gia Grigalava has an estimated net worth of more than $2 Million. A football player has multiple sources of income. They have a good amount from their sponsorship and advertising deals. Gia has been playing at the professional level for almost fifteen years. 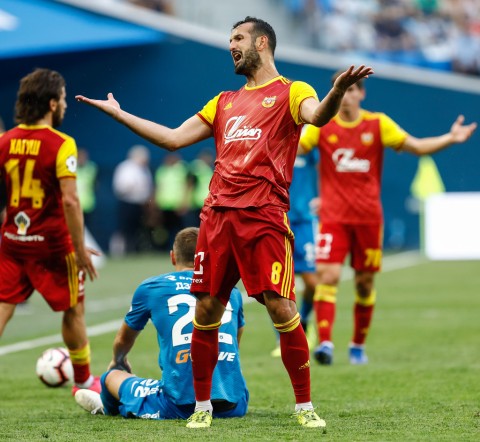 Gia celebrates after scoring a goal with his teammate SOURCE: Zimbio

Grigalava represented the national team in numerous international matches and must be earning a good amount as his salary. As of early 2022, He has a market valuation of more than €600,000. Filip Uremovic is playing with Rubin Kazan and makes an annual salary of £676,000.

Gia does not show much presence on social media. The football player is very private about his relationship status. Gigalava could be single, dating or even married to his wife. Looking into this personal life, The player must be a married man living happy married life along with his children.

Gia must be waiting for the right time to open up about his relationship status. He spends his free time with his family and friends.

Gia joined Rostov FC's youth academy in 2004. The player represented in several divisions for the youth academy and earned his senior team call in 2007. He appeared in just one game for the club and then moved to SKA Rostov-on-Don. Grgalava signed a three-year contract with the club. In 2009, Gia was loaned to FC Moscow for the season and appeared in fourteen games.

Grigalava spent his last days of the 2010 season with Rostov in a loan season. In early 2011, Volga Nizhny Novgorod signed him on a three-year contract. The player had a good season with the club and appeared in fifty games. In mid-2013, Grigalava moved to Anzhi Makhachkala and signed for two seasons. He appeared in twenty-two games. After having ups and downs, The player eventually joined Arsenal Tula and signed a four-year contract.

Gia appeared in eighty-one games for the club and scored three goals. In early 2022, Grigalava moved to Khimki and signed a multi-year deal with the club for an undisclosed fee. In 2015, He was banned after testing positive for a banned substance.

Gia made his international debut in 2009 with the Russia-21 team. The player appeared in just one game for the division and earned his senior team call in 2011. Grigalava has appeared in twenty-three games for the international team.