Gerhard was previously married to Ana Corvo. As of now, he has an estimated net worth of $18 million.

A native of Worgl, Austria, Gerhard Berger was born on the 27th of August 1959. Talking about his nationality, Berger is an Austrian and he belongs to white ethnicity. He was born to Johann Berger and Olga Berger. His father Johann owned a truck company. He also has a sister named Claudia Auer-Berger.

In 1984, Gerhard made his debut as a racing driver with Team ATS, a German Formula One team that was named after German alloy brand Auto Technisches Spezialzubehor. The following year, he joined a full season for Arrows, though both he and his teammate Thierry Boutsen were hampered by the Arrows A8 which wasn’t the best chassis on the grid and didn’t permit either the immense power of the BMW M12 engine.

With the car which was powered by the BMW turbo engine (1, 400 bhp (1,044 kW; 1,419 PS) he qualified to race in Grand Prix in Mexico and eventually won his first Grand Prix in Mexico using the Benetton B186. At the time, he was also on course for an easy victory at his home race, the 1986 Austrian Grand Prix.

During his early career, Berger won 1985 Spa 24 Hours partnering Italian touring car ace Roberto Ravaglia and fellow Formula One driver, Marc Surer of Switzerland as well as established himself as a very fast driver in Formula One that year.

For the 1987 season, Gerhard Berger signed for “Ferrari”, replacing Stefan Johansson and partnering the Italian Michele Alboreto.  There he reminded 3 years and made a total of 98 pts and earned 7th, 5th, and 3rd WDC respectively.

Then in 1992, he switched to McLaren and joined Ayrton Senna. During his three years with McLaren, he obtained 4 pole positions and out-qualified Senna 8 times. Furthermore, Berger won thrice in the three-season, gifted the "1991 Japanese Grand Prix" by Senna: as well as victories in Canada and Australian in 1992.

After three years with Mclaren, Berger made his comeback to Ferrari and played in the "1993 South African Grand Pix". During the year, his best result was the third position at the Hungarian Grand Prix.  Then the following year, he started with the 1994 Brazilian Grand Prix.

In 1996 Gerhard Berger moved back to Benetton and remained till 1997. There he made a total of 28 Pts and earned 6th and 5th WDC respectively.

In late 1997, Gerhard Berger retired from the racing. After retirement, he became a Competitions Director at BMW, until 2003. He was the first-ever to drive an F1 car on the new Shanghai Grand Prix circuit when Berger demonstrated a 2003 Ferrari F2003-GA.

Additionally, in 2012, he became the President of the FIA Single Seat Commission and left the seat in December of 2014. And currently, he is the chairperson of ITR, the promoter of the Deutsche Tourenwagen Masters.

Gerhard was married to Ana Corva on September 1, 1995. With his ex-spouse Ana, he has 2 children Sara Maria and Heidi. The couple separated after 18 years of married life in May 2013. 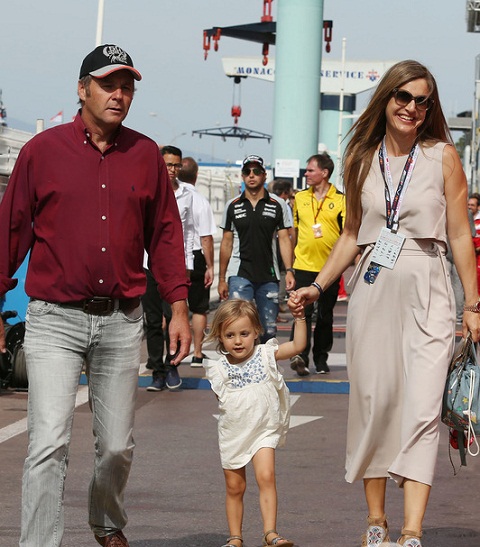 Gerhard Berger with his former wife and daughter SOURCE: Motorsport.com

Gerhard is currently dating Helene and has two children; a daughter and a son with her. His first daughter named Elle born in 2013 and has a son born in 2016. Moreover, he had an affair with Rosi Troppmair since the late 1970s. However, they were separated in 1987. He has a daughter with Rosi named Cristina Berger born in 1980.

Berger is a good friend with the late Ayrton Senna and former F1 team-mates, Jean Alesi.

As of 2020, Gerhard has an estimated net worth of $18 million. In 1995, Berger had total earnings of $13.5 million and was ranked 13th on the “The Highest-Paid Athletes”. He made around $12 million from winnings while the remaining $1.5 million came from endorsements.