George Munsey is a well-known Scottish professional cricket player. He has been playing international cricket for more than six years. Munsey is a left-handed opening batsman and also worked as a salesperson for Gray-Nicolls. George currently plays for Kent Country Cricket Club for the Domestic league.

George Munsey was born Henry George Munsey on February 21, 1993, in Oxford, England. He rose to fame only after his successful career so, much about his early life and his parent is still under the radar. Munsey graduated from Loretto School and attended the school on a golf scholarship. George stands six feet and one inch tall and weighs 70 kg.

George started his early days as a golf player. He even got numerous scholarships for golf in High School. The player moved from his hometown to pursue his golf career but changed his mind from becoming a pro golfer to a cricketer as he found tough challenges in pursuing his interest in golf. George started training with the Grange Club and Watsonians in Scotland. 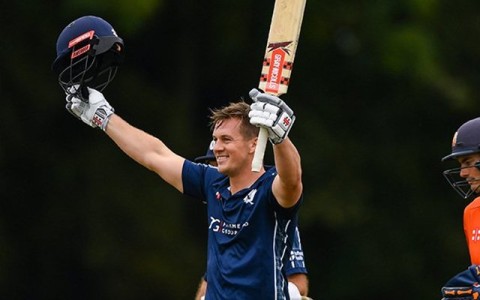 In 2014, Munsey grabbed a first central contract with Cricket Scotland and made his international debut at the T20I game against Ireland in 2015. He was selected for the  2015 ICC World Twenty20 Qualifier in July 2015. George made his first-class debut for Northamptonshire against the Australians on August 15, 2015. Munsey spent his time with the Scotland T20I team playing in numerous events globally. The player spent a season with Leicestershire in 2019 and then with Hampshire in 2020.

George has moved to Kent for his 2021 season. Munsey made his ODI debut for the Scotland international team in January 2017 against Hong Kong on the mid-day. In 2019, The player was selected to play for the Brampton Wolves franchise team in the 2019 Global T20 Canada tournament. In his career of thirty-one ODI games to date, He has an average of 31.68 runs per game and 27.60 in the T20I playing fifty-one game.

In 2020, George and Kyle Coetzer made an opening partnership of 200 runs, the highest partnership for any wicket for Scotland in T20Is. In September 2021, Munsey was part of Scotland's provisional squad for the 2021 ICC Men's T20 World Cup, but they could not make it to the further round.

George is very much private about his relationships status. He has not shared a word about his girlfriend and love life. Munsey has successfully kept them away from the spotlight. The player is an active social media user, and following his timeline, we can be sure that George is single as of 2021. His timeline is filled with photos of his games, training and vacations.

Salary, Net Worth and Earning

George Munsey has an estimated net worth of more than $200,000. He has earned most of his net worth through his cricket career. The salary of a cricket player is not much high compared to other countries like India, Australia, in Scotland. Munsey is very early in his career and will be making millions in the future.