Gabriela Dabrowski was born Gabriela "Gaby" Dabrowski on April 1, 1992, in Ottawa, Ontario. She is the daughter of Wanda Dabrowski and her husband, Andrea Rabzak.  Gabriela is of Polish origin and speaks English, French, and Polish. Her father works as her tennis coach. Dabrowski stands five feet and ten inches tall and weighs 70 kg.

Gabriela Dabrowski has an estimated net worth of more than $2 Million. She has accumulated most of her net worth through her successful career as a professional tennis player and numerous sponsorship and advertising deals. She is the first Canadian woman to win a senior Grand Slam title. In the ongoing season of WTA, Dabrowski has earned merely earned in three figures. 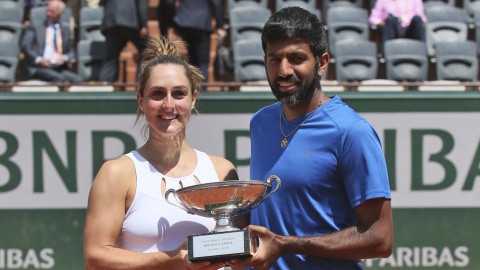 Dabrowski made her professional debut in 2011 and merely took home $25,000 as her prize money. The following season, She could not win many games and had meager earnings. In the 2015 season, Gabriela had an injury that left her out most of the season. Totaling her prize money, It sums to $3,241,487. She is very much early in her career and shall be making millions in the future.

Gabriela is an active social media user. Her timeline is filled with her photo of her games and training. Dabrowski is very close to her tennis partner Emily Webley-Smith and keeps sharing her pictures with her. Some rumors claim them to be dating each other, but none of them have ever opened about it.

Gabriela is at the peak of her career and must be focusing on making a promising future ahead. We will update you if there is anything about her relationship shortly.

Gabriela started training tennis along with her father from a very early age. She played in her first provincial tournament when she was 8. At the age of fourteen, Dabrowski became the first Canadian to win Les Petits As, one of the most prestigious 14 and under tournaments globally. In 2011, Gabriela turned professional and reached her first WTA doubles final in 2013. The following year, The Canadian player won her first WTA doubles title and her first professional singles title over Maria Sanchez at the Tevlin Challenger.