Frenkie de Jong is a professional football player, who is currently showing his talent from Spanish club Barcelona. Frenkie de Jong plays the role of the midfielder from Barcelona as well as from the national team of his country. de Jong is a versatile player who has good defensive skills. He started his career from Willem II in 2015. Later he joined Ajax and in the present state, he is in Barcelona.

Frenkie de Jong was born on born 12 May 1997 in Gorinchem, Netherlands. He grew up with his father John de Jong who is also a football player and his mother Marjon Schuchhard-De Bruijn, who is also a dynamic footballer. Frenkie de Jong's family was the sport-loving family which helps him to uplift his career with fewer obstacles.

Frenkie de Jong Net Worth and Salary in 2020

Frenkie de Jong is a multitasking player who has moved to Barcelona from Ajax at seventy-five million euros. the de Jong market value is varying day by day, currently, his market value is around  €90m. His present Net Worth is around €12 Million Euros.

Frenkie de jong's total transfer fee is found to be €85.13m. Moreover, Frenkie has endorsement deals that help him to increment his net worth. Frankie's girlfriend Mikky revels that Frenkie has already brought a house in Barcelona Certainly, he is well set up and is living life happily. Frankie is non-materialistic and does not want any kind of expensive material or belongings.

Frankie de Jong is twenty Years old, and he is unmarried, but Frankie is in a relationship with Mikky Kiemeney. She is a Former Hockey player for Dutch side HC Den Bosch. Frankie and Mikky met for the first time in High School and from that day to till date they are together. 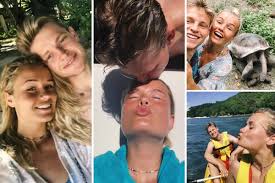 Frankie and his girlfriend Mikky in Africa SOURCE: The Sun

After transfer to Barcelona from Ajax Frankie spent or enjoyed a vacation with his girlfriend Mikky in Africa. She supports Frankie in each and every game which motivates him to be better and better. She supported him in his initial phase of football- this was the main reason behind Frankie's success.

Frankie de jong is a young talented player. His body parts have not developed completely so he has to face the problem like a Hairline crack in calfbone Tendonitis injury and so on. to overcome such a problem he must be physically and mentally mature. Due to the lack of perfect physical and mental appearance he faced the injury problem.