Freddie D. Coleman is a famous sportscaster currently hosting the Freddie Coleman Show of ESPN broadcasted on weeknights from 11 p.m. – 2 a.m. ET, and Sundays from 10 p.m. – 1 a.m. edition. He also worked for FOX Network and other several networks.

Freddie earns around $100,000, annually with a net worth of over $1.5 million. Freddie is a married man and has a child but the details are not available.

Freddie D. Coleman was born on December 19, 1965, in Brooklyn, New York. He holds an American nationality and belongs to a Mixed ethnic group. Information about the family and sibling is not published on social media.

Freddie attended the Mansfield University of Pennsylvania where he completed his Bachelor of Arts degree in Mass Communication.

Coleman started working with ESPN on 2004, June 26 hosting the primetime program Gamenight and later started to run his own show "The Freddie Coleman Show" broadcasting on weeknights from 11 p.m–2 a.m. ET, and Sundays from 10 p.m.–1 a.m. 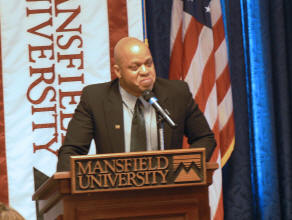 In addition, he also worked for FOS sports Radio, Cablevision of Dutchess County. Besides, he also served Marist basketball as their color analyst. Freddie also managed the on-air staff and promoted WPDH- FM 101.5( May 1998-March 1999) at Oldies 97– WCZX- FM( March 1999-May 2000).

Freddie Coleman Net worth and Salary

The American sportscaster/anchor Freddie D. Coleman has an estimated net worth of $1.5 million and receives an annual salary of $100,000 from his successful reporting career with ESPN.

Learning that the biggest network sports announcers paid about $5 million a year is enough to get anyone to do what they love. Although this wage is correct, it is far from the average wage of $41,800 reported by the Bureau of Labor Statistics.

Since ESPN is recognized for paying a good amount of salary to its employees, Freddie earns a decent amount from the network. Besides, he also worked for other networks which helps to add some money to his net worth.

The detailed information regarding the married life and children is not disclosed yet. so far it has been found that Freddie is a married man and has a child. Details about the marriage date and wife of Coleman is not found on social media. Since he is a career-focused man and always remain far from the rumor and controversies.with bald hair

The famous sportscaster has a charming personality with bald hair and is 6 feet 1 inch tall in height. He is also a member of the Football and Basketball Writers Association and also the National Association of Black Journalists.