Franz Wagner is a basketball player from Germany who currently plays for the Michigan Wolverines of the Big Ten Conference. He began his career with the Alba Berlin side, Basketball Bundesliga (BBL). Named the bbL Best German Young Player, he has represented his national side at a youth level, winning a gold medal at the Albert Schweitzer Tournament in 2018.

Before playing in the Big Ten Conference, representing the University of Michigan, Franz played professionally in the Basketball Bundesliga side Alba Berlin (2017-2019) and SSV Lokomotive Bernau (2018-19). Playing three seasons in the Bundesliga has earned Wagner a decent fortune. The basketball player in the league earns $500k-$800k per season.

Since Franz is now representing his college team, he does get paid. As a matter of fact, it is against the rule to pay college athletes as per NCAA rules.

considered a four-star recruit by 247Sports and Rivals, Wagner was among the NCAA Division I programs that recruited him was Stanford, Butler, and Michigan. On 6th July 6, he signed to play college basketball for Michigan which turned down an opportunity to sign a professional contract with Alba Berlin.

Assigned shirt No. 21 the shooting guard made his freshman debut on 27 November 2019 against Iowa State where he recorded six points, three rebounds, and one block in 23 minutes in an 83–76 win in the quarterfinals of the Battle 4 Atlantis. On 6th December, he had a career-high 18 points in a 103–91 win against Iowa in its Big Ten Conference season opener. He was named to the 2020 Big Ten All-Freshman team.

The following season, Wagner averaged 13.0 points per game with 6.3 rebounds, a team-high 30 steals, and a second-best 23 blocks. He concluded the season being named second-team All-Big Ten by the coaches and third-team by the media.

Franz is the son of Axel Schulz and Beate Wagner. Further, he is the younger brother of Moritz Wagner, also a basketball player in the National Basketball Association (NBA) for the Washington Wizards. Finished his collegiate career at the University of Michigan, he picked with the 25th overall in the 2018 NBA draft by the Los Angeles Lakers. 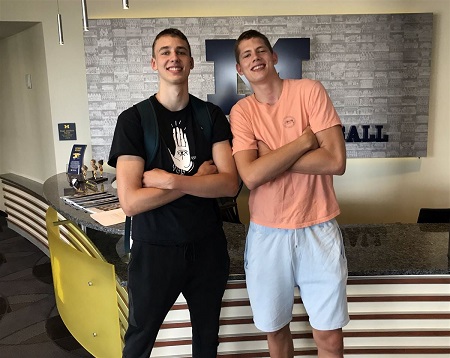 Besides, there is not much information about his private life such as his relationship or girlfriend. Active on IG with 23.7 k followers, all his posts are from his professional. Currently, he is single.