Francisco Trincao is a professional football player from Portugal and currently plays in the English Premier League club Wolverhampton Wanderers loan from Barcelona. Previously, he played for the La Liga club Barcelona FC before moving to Wolves. Trincao wears the Number 11 shirt for his current club and has made 7 appearances in the national team.

The Wolve's Number 11 also plays for the Portugal national team making his debut on September 5, 2020. Recently, in 2020, UEFA Nations League, he was also included in the national squad. Trincao has represented Portugal in various tournaments. He is on the list of the people who have won the under-19 2018 European Championship, where he had been a top scorer.

Who is Trincao? Personal Information and Bio

Francisco Trincao was born on December 29, 1999, in Viana do Castelo, Portugal, and his birth sign is Capricorn. His birthname is Francisco António Machado Mota de Castro Trincão.

His father's name is Goncalo Trincao, and his mother's name is not found yet. Trincao's parents are from Portugal and were great supporters of Portugal's football team. As a passionate football player, Wolve's No 11 started his career with Barga B and later joined Barcelona with a fee of €31 million fees in January 2020.

Trincao's Net worth? Details about his Salary and Contract

Francisco Trincao has an estimated net worth of 19.5 million euros. He earns a good amount of money by playing football professionally. He also makes earnings from different brands deals. 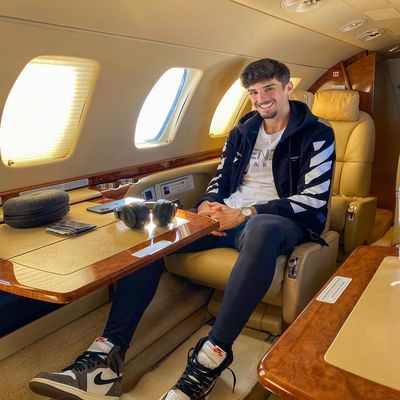 Francisco Trincao is heading out for his vacation.
SOURCE: [email protected]

According to transfermarkt, Trincao's market value is estimated to be €22.00m as of December 23, 2021. and €30.00m is the highest value of the young Portugal national, which was when he was transferred from Barga to Barcelona. His earnings has always been from contracts, salaries, bonuses, and endorsements.

As of 2022, 23 years old, Trincao doesn't seem to be dating anyone. The ambitious youngster hasn't declared about his relationship through any media. Trincao outwardly appears to be living a single and happy life.

Wolve's Winger has been presenting the best performance in the matches, obviously because of his focus on his career. It seems like Trincao is rather focused on building his career than anything else like a relationship.