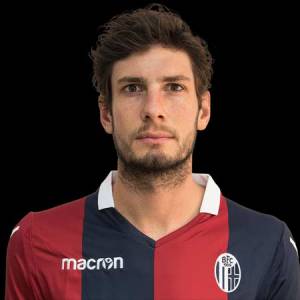 Avenatti has played for the Uruguay youth team and is yet to make his official debut for Uruguay senior team.

Felipe Avenatti was born on 26 April 1993 in Montevideo, Uruguay. He holds both Uruguayan and Spanish by nationality.

He was highly interested in playing football since his early childhood days.

Felipe Avenatti’s Net worth  and Salary

His annual salary is around  € 1.3 million with a weekly salary of  € 26,000 which he is estimated to earn from Bologna FC

Looking at his relatively fresh career, his net worth is estimated to be around $ 1 million.

The Uruguayan striker made his senior and professional career debut with the main team of River Plate on 19 February 2012 against  Nacional.

He scored his first goal for River Plate against Defensor Sporting on 3 June 2012.

Avenatti before leaving the club in 2013, made 33 appearances and score 12 goals for the side.

Following an impressive playing stint with the Uruguayan club, he signed a four-year contract deal with the Italian professional football club, Ternana Calcio for a reported transfer fee of €4 million on 21 August 2013.

He scored his Italian club goal for Ternana against Pescara on 17 November 2013.

Avenatti made 137 appearances and scored 30 goals for  Ternan Calcio before parting ways with the Italian club in 2017.

He later moved to Paraguay and signed with Paraguayan football club, Sportivo Luqueno in 2017.

Currently, he is transferred and playing for Italian football club, Bologna FC 1909 as part of the loan deal for the 2017 season.

He made his international debut for the youth team of Uruguay against Croatia on 23 June 2013.

Avenatti scored his first goal for Uruguay against Spain on 6 July 2013. He was the part of the Uruguay U 20 FIFA World Cup that finished as runner-up in the tournament. His other teammates include Guillermo Varela, Diego Rolán, Diego Laxalt etc

As of 2018, he has yet to make his international debut for senior team of Uruguay.

Currently, 25, Avenatti stands at a height of 6 feet 5 inches and weighs around 86 kg.

As per some sources, the Uruguayan striker, Felipe Avenatti is married to his wife named, Jessica.

The couple tied their wedding knots on April 25, 2016, and the pair is currently enjoying a quiet and happy marital life.