Marrying the high school sweetheart is every woman's dream. And Samantha Bracksieck found her dreams come true as she walked down the aisle to marry her long-time boyfriend. However, Bracksieck gained infamy as the girlfriend of Judge on 2020-02-26. It could have led the duo to break things off, yet Aaron and Samantha's relationship improved. And ten months after the scandal, the Bracksieck and Judge tied the knot.

After the incident, Samantha started living under the radar. Similarly, Judge's wife went off the grid and kept very few and far between public appearances. And Bracksieck is off the social media platforms as we speak. And even today, the celebrity wife keeps the world guessing about her early days.

Aaron Judge and his wife, Samantha Bracksieck, exchanged their vows in Hawaii!

Many people fantasize about their wedding and think about the venue's location. Some try the destination wedding or a themed one, but more often than not, a couple wants to exchange their sacred vows in a romantic place. And what's one of the most romantic places in the world? Hawaii, of course, Samantha Bracksieck and her husband, Aaron Judge, swore their eternal love in Hawaii! Bracksieck and Judge officially became husband and wife in December of 2021. However, the long-time girlfriend and boyfriend wanted to keep their big day as intimate as possible. So, Aaron and his spouse, Samantha, decided to preserve the exact date of their marriage.

Despite wanting to keep their wedding low-key, the pictures and the news had already leaked by the end of their wedding day. And after the marriage, Aaron and Samantha kept a low profile enjoying their honeymoon period of wedlock.

Samantha Bracksieck and Aaron had an on-and-off relationship

As many wise men say, nothing is perfect, and no, Samantha Bracksieck and Aaron Judge's relationship wasn't ideal. Throughout their long relationship, the couple went through many breakups. But the heart wants what the heart wants, and so, Aaron and Samantha always patched things up.

Samantha and Aaron started dating in high school. Also, Aaron met his future wife at Linden Highs School, where he played as a three-sport star. And now the married couple knows each other like the back of their hands. However, Bracksieck kept herself from the spotlight despite dating since their teens. And over the years, one incident almost broke the camel's back.

Samantha's name-dropping resulted in a massive controversy and dragged Aaron with her.

Back in 2020, Samantha Bracksieck became one of the most trending names on the internet. But, sadly, Bracksieck came to the spotlight for all the wrong reasons. After the cops pulled over the celebrity wife, she proceeded to drop names. 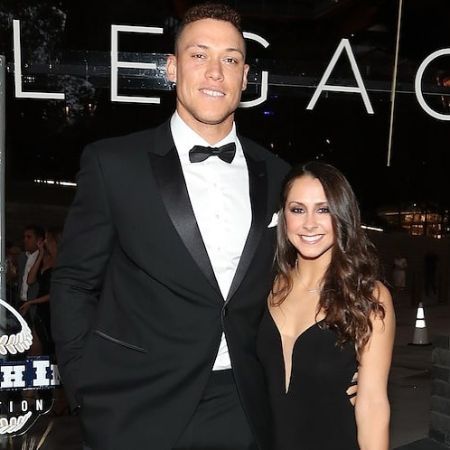 Aaron Judge and his wife Samantha Bracksieck at an event together. SOURCE: Instagram

Intoxicated, Samantha spoke in a slurry tone. After taking the breathalyzer test, the police proceeded to detain Bracksieck. But she later added fuel to the flames as she asked the officers, "Do you know who my boyfriend is?!"

Although much of the fiasco remains under wrap, Samantha later pleaded guilty to DUI. Cutting a deal with the prosecutors, Bracksieck was given ten days of jail time. But the authority shaved nine days off from her sentence, and she gained credit for one day as time served. Similarly, the court ordered the celebrity wife to attend an alcohol abuse screen and complete any recommended treatment.

Did Samantha's arrest affect her relationship with her husband?

Although much about the scandal remains hidden from the public, how did Samantha's DUI arrest affect her relationship with Aaron Judge? Although the MLB athlete never made any public statement, private talk is another matter. 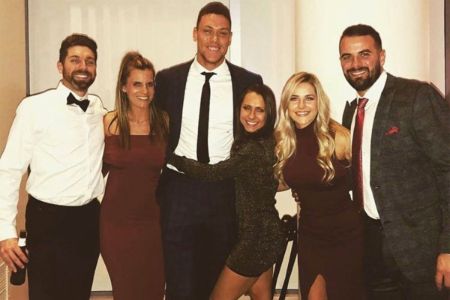 Aaron Judge and his wife Samantha Bracksieck at his friend's wedding. SOURCE: Twitter

Throughout his career, Aaron kept a clean and respectful image as an athlete. And his drunk girlfriend dropped his name to get out of a ticket? Any lesser man would have blown a gasket on such a controversy. But, Judge kept a calm mind and let Samantha deal with her issue.

Even facing such a hurdle, Samantha and Aaron's love for one another stayed strong. And eventually, Judge proposed to his high school sweetheart. And by 2022, the New York Yankees Outfielder and Samantha would officially be husband and wife.