Ezgjan Alioski is a well-known Macedonian professional football player. He has been playing in the professional league for more than a decade. Alioski currently plays for the Pfor Saudi Arabian club Al-Ahli and the North Macedonia national team. The multi-talented player plays on the left-wing and can also play as a striker, attacking midfielder, right-wing, left wing-back, or left-back.

Ezgjan Alioski was born on February 12, 1992, in Prilep, Macedonia. He comes from an ordinary middle-class family and has not shared a word about his parents and siblings. Ezgjan Alioski stands five feet and eight inches tall and weighs 63 kg.

The Macedonian player started his youth career with Young Boys in 2003. He played with its youth team until 2010 and made his professional debut in 2010 with Young Boys U23. Alioski was part of the team until 2013. In his three years with the team, He appeared in fifty-seven matches as a left-back and scored four goals. In January 2013, Ezgjan moved to Schaffhausen on loan, but shortly after the agreement, the deal was permanent.

Ezgjan joined Lugano on loan for the 2015/16 season. He appeared in sixteen games and scored three goals. Alioski ended his Schaffhausen career playing for seventy-seven games and scoring four goals. In 2016, The Macedonian player made his deal permanent with Lugano. In the 2016/17 season, Alioski appeared in thirty-four games and scored sixteen goals. In July 2017, He moved to English club Leeds United and won numerous awards in his first year. Ezgjan ended the season with seven goals and five assists.

Alioski has appeared in 161 games for Leeds United. In the 2019/20 season, Leeds became the EFL Championship winner and made his premier league debut in September 2020. In March 2021, Alioski was strongly linked to a move to the Turkish side of Galatasaray, causing an uproar from Leeds supporters.

Alioski represented Macedonia in numerous divisions. He was part of the U19 team in 2010 and then in U21 in 2013. Ezgjan made his senior team debut in 2013 and scored his first international goal against Albania in September 2016. The player has forty-six caps in his international appearance. He is part of the 2020 UEFA Euro along with Enis Bardhi and Elif Elmas.

Alioski is involved in a romantic relationship with his longtime girlfriend, Ornella Loffler. The love birds have been dating each other for more than four years. The last time, Ezgjan shared a photo with his girlfriend was back in 2017. He is very much private about his love life. 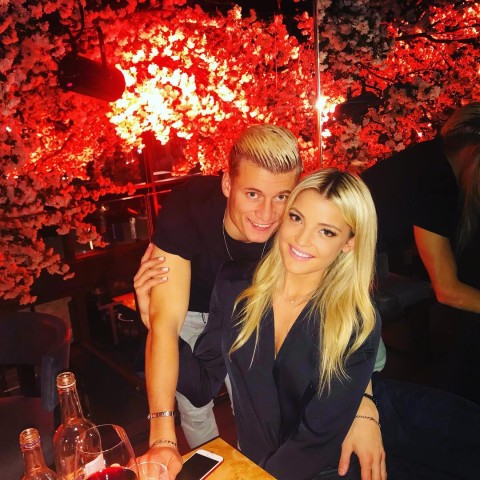 Ezgjan along with his girlfriend, Ornella at an event SOURCE: [email protected]

It's been more than four years of his relationships, the duo is yet to get engaged or tie their wedding knot. Ezgjan and Ornella could be planning for a lavish and beautiful wedding ceremony shortly.

Ezgjan Alioski's Salary and Net Worth

Ezgjan Alioski has an estimated net worth of more than $2 Million.

In 2021, he joined Al-Ahli. According to the source, Al Ahli offered him a 2-year contract with a salarly around €1.5 million and a signing bonous of €1 million.

Alioski must be earning a handsome amount through his sponsorship and advertising deals.