News Evan Longoria is living Happily with his Wife Jaime Faith Edmondson,Know about their Relationship

Evan Longoria is living Happily with his Wife Jaime Faith Edmondson,Know about their Relationship

Evan Longoria is an American professional baseballer who currently plays as a third baseman for the San Francisco Giants where Pablo Sandoval plays after being traded from Tampa Bay Rays. Longoria nicknamed as Longo signed the $100 million contract extension for 10 years with the Rays through 2022.

The 32-year-old baseballer married his longtime girlfriend, Jamie Faith Edmondson and shares 2 children. So, how is the relationship between Evan and his wife? Are they living happily? Let's know about their married life, relationship and children along with their past affairs.

Evan, who was a teammate of Lucas Duda while in the Bay Rays, seems to be shy when it comes to his personal life. Even though has not given the details of his love life, the baseballer revealed his relationship with Jamie in February 2012.

Jamie, the January 2010 Playmate of the Month, is a former Miami Dolphins cheerleader and police.

After a year of their relationship, the couple got engaged in 2013. Finally, the happiest moment of their life came as they got married on December 31, 2015, in front of their family members, relatives, and close friends.

Have a look at their beautiful wedding photo.

The special wedding on the New Year Eve in Los Angeles was organized by pro-planner Windy Weiss and the moment was captured by photographer Elizabeth Messina.

Jamie also shared her excitement of her wedding on Twitter captioning "This is the moment that officially made me a married woman I never get tired of kissing this man."

This is the moment that officially made me a married woman?? I never get tired of kissing this man?? @Evan3Longoria pic.twitter.com/MlHipUWazL

It's been nearly a couple of years since their marriage, but they seem deeply and madly in love with each other like the newlywed.

The couple free from the mishaps of separation and divorce makes their appearance together along with their son and a daughter.

Evan and Jamie with their children

Well, Evan and Jamie are both free from the records of affairs in the past, however, Jamie was rumored to have hooked up with Marcus Allen, a former American footballer in 2010. But, without a strong proof,  the issue got a title of a hoax.

Children of Jamie and Evan

As you all have known, that Jamie and Evan are the parents of a son and a daughter, Elle, and Nash, but the couple welcomed their both children before their marriage.

The couple announced about their pregnancy with their first child in December 2012 with the due date of April 1, 2013. But, the happiness came six weeks earlier to the couple as they welcomed their daughter, Elle Leona Longoria, on the night of February 20, 2013. 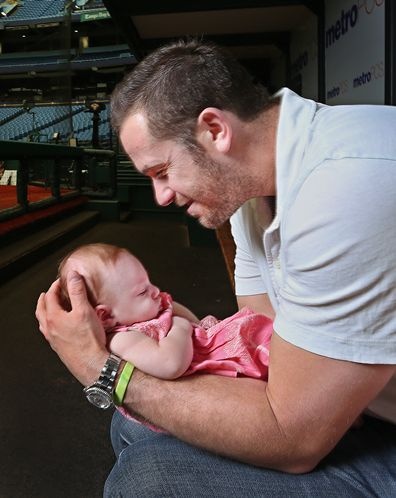 Again, the happiness knocked the door of Evan and Jamie. Yeah, as you guessed, the couple were expecting their second child which was announced on June 7, 2014. Following the announcement day, Jamie tweeted a photo of her and Elle with a belly bump.

The couple became parents for the second time after they welcomed their son, Nash in November 2014. However, Evan was in Japan and watched his son through the FaceTime.

As of now, the happy family is living in their lovely home in St. Petersburg which Evan Longoria bought for $1.485 million in 2013.

Let's wish them a happy moment and stay tuned for more updates.