Ethan Kwame Colm Raymond Ampadu, professionally known as Ethan Ampadu, is professional soccer player. Ethan has currently signed to the Seria A club Spezia on loan from Premier League club Chelsea. He plays as a center-back and defensive midfielder for the team. Also, he is a vital player for the Wales national football team. However, he initially played for England U16 level in 2015.

The former Chelsea star player Amapadu is the youngest player ever to appear for Exeter City's first team at age 15. Because of his physical appearance and defensive playing style, he is likened to the former Chelsea defender David Luiz, a Brazilian nationality. Coming to 2022, Ethan has played in world top leagues such as English Premier League, Serie A, and Bundesliga, linking with the clubs such as Chelsea, Sheffield United FC, RB Leipzig, Venezia, and Spezia. For Spezia, Ethan plays, wearing jersey number four on his jersey.

Everything on Ethan Ampadu's bio, family, and before life

Starting with his surname Ampadu, it came from African roots of the Ghanaian nationality. Ethan Amapadu's full name goes by the name Ethan Kwame Colm Raymond Ampadu. On 14 September 2000, Ethan was born in Exeter, England. As of 2022, Ethan is just 21 years of age, and he is a right-footed player. Per his birthdate, Ethan's star sign is Virgo. He was lucky that he was born in Sporty family background where soccer was everyone's favorite. Moreover, his father, Kwame Ampadu was also on the footballing field and played professionally played soccer at the EFL clubs, including Arsenal. His ancestry was from Ghana.

After his retirement, his father contributed to football development by persuading as a football coach. He coached the Arsenal youth system and U18 level. Following his footprints, Ethan persuaded his career as a pro footballer in 2016, and all credit to his father for the most significant contribution to his career. To your knowledge, Ethan is a multi-racial individual. His childhood was comfortable as his father, Kwame, was a former professional footballer. His mother's name and professional are still unfamiliar, as he has kept it suspenseful.

Thanks to his mom, he holds a Welsh citizenship card. Due to his parent's mixed nationality, he has dual citizenship as a citizen of Ghana, England, and Wales. Additionally, Ethan studied at his junior level at Lady Smith Infant School. All Ampadu family members practice Christianity religion.

Is he the wealthiest rising Welsh footballer? Net worth and annual earnings

It's pretty challenging to tell whether he is the wealthiest rising Welsh football. But indeed, he is among the highest-paid youth soccer player in the present context. According to our research, Ethan has an estimated net worth of £1.92 million, including all his properties, cars, and mansion. When he was a youth player for Chelsea, the club paid him £5200 annually in 2018 but shortly after beginning his senior pro career. He started making a lot more than he used to. He received a weekly wage of £8,300, which sums up to £4,31,000 per annum. In his last year with Chelsea, the club paid him an astronomical salary of £12,000 weekly and £6,24,000 yearly, making the highest pay during his Chelsea tenure. Regardless, there is no accurate info regarding salary figures he gets from his current team.

Moreover, his value increased massively because of his defensive expertise and consistent deliverance. He is now worth €13 million. He was one of the most expensive amateur players, with the highest value of €15 million on 25 May 2021. At the moment, he resides in an outlandish lifestyle. Also, he owns a well-furnished mansion and sports cars, which flexes ten on his social media account.

At the moment, Ethan Ampadu, the Exeter-born player, does not have a girlfriend. More to that, there is no evidence of his past relationships and love affairs. However, it is doubtful that he might be seeing someone privately. As for now, he is busy with his footballing career; as a result, he has no time for dating. His low-key nature made it even harder to determine if he has any partners or GF. Hence, due to a lack of information regarding his relationship matters, he is assumed to be single for now.

As his father Kwame was in a footballing career, he significantly influenced Ethan. After he retired from soccer, Kwame's soccer dreams were alive through his son Ethan's football career. Being an Exeter boy, he set foot in soccer, joining the hometown youth system  Exeter City in 2008. Ethan was just seven years of age while joining Exeter City academy. Ethan is a product of the Exeter City youth system. After eight years of his long amateur career at Exeter City, he got to appear for U18 at the age.

The following, UEFA EUROPA League 2018-19 champion Ethan successfully earned his spot on Exeter's senior team. He created the history of being the youngest ever player to play for the club's first team, aged 15 years, ten months, and 26 days. He broke the 87-year-old record set by Ben Christine. The following 2017-18 season, Ethan signed off the EPL team Chelsea on 1 July 2017. His Chelsea debut came on in an EFL third-round match against Nottingham Forest as a  substitute player replacing Cesc Fabregas in the 55th minute on 20 September 2017. 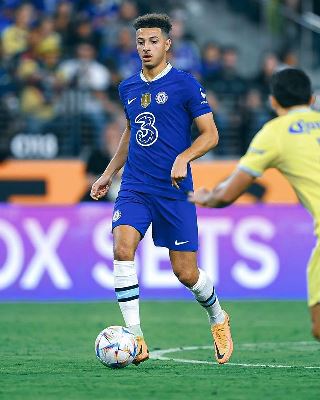 Ethan with his former Club Chelsea in 2018. SOURCE: Instagram

Likeswise, he extended his Chealse contract for five more years in September 2018. Unfortunately, then Chelsea manager Frank Lampard assured to loan him RB Leipzig for the 2019-20 season. Likewise, ending his agreement, Ethan was back in the Premier League, marking a contract with Sheffield United on 7 September 2020. He appeared in all 29 games of the Blades. Unfortunately, Sheffield United was relegated that year. From Sheffield, he joined Venezia and Spezia on loan. So far, Ethan has played a single match for his new club Spezia.

He was a former England youth international before Wales soccer national player. Previously, he also qualified to represent Ghana and the Republic of Ireland. But he opted to play for Wales national team. His first presence for Wales was in 2017 when he competed in U17 groups for the first time. By age 16 only, he was able to make his spot in th Wales senior soccer squad. Coming from the bench in the 63rd minute in place of Joe Ledley, he made his Wales debut on 10 November 2017 at the State de France in the clash against France. He is a starting XI of the Wales national team who was also part of the squad to qualify for a FIFA World Cup in 1958.

Get more athletes' diversifying bio and gossip at Playerswiki.