Ernestine Sclafani is an American entrepreneur, public relations executive & businesswoman. Ernestine is better known as the wife of an American sports columnist, commentator, and television personality, Skip Bayless. The love birds have been married for more than ten years. Sclafani has been working as a media relations specialist and public relations guru.

Ernestine Sclafani was born in 1962 in Long Island, New York. Sclafani rose to fame only after her successful career so, there is not much information about her early life with the media. Her Italian-American father was an engineer at Republic Aviation. After graduating from High School, Sclafani enrolled at the Fashion Institute of Technology.

Ernestine Sclafani tied her wedding knot with her longtime boyfriend, Skip Bayless. The love birds had been dating each other for more than ten years before tying their wedding knot. The duo walked down their wedding aisle on July 28, 2016, in a private wedding ceremony. They had invited only a few members from both the family and some close friends to their wedding. 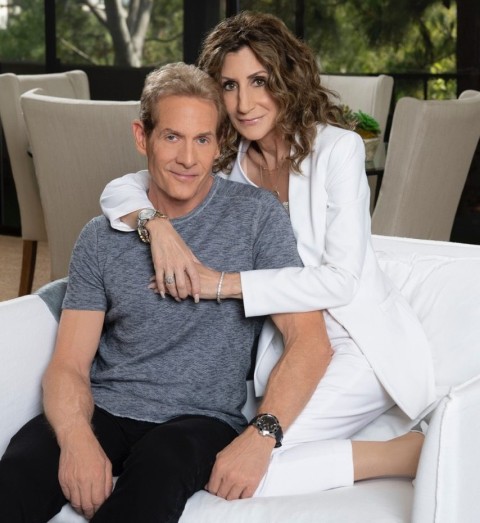 Sclafani and Skip got engaged in 2010. The ESPN personality proposed her on an Oklahoma City-bound plane from Newark. They first met each other at the Bayless ESPN2 show ‘Cold Pizza’ while Ernestine worked in public relations. They exchanged cards and soon went on their first date, where Bayless told her that no women would ever be more important to him than his job.

Ernestine Sclafani has an estimated net worth of more than $1 Million. She had worked as the Vice-president of Consumer Media Relations for more than thirteen years. She has been active economically since 1981. Ernestine started her economic career working as Assistant Accessories Director. Sclafani must be adding a huge sum to her net worth.

Ernestine's husband, Skip Bayless, has an estimated net worth of more than $10 Million. He has been earning well working as a sports commentator and sports pundit. Skip started his career as a radio host and a reporter. In 1991, Bayless began a two-year stint hosting a sports talk radio show for Dallas radio.

Bayless is among the highest-paid sports commentator currently working in the united states. Skip worked with ESPN from 2004 until 2016. He had earned millions from his contract with ESPN. In 2016, his contract ended, and he joined Fox news. Recently, In early 2021, Skip extended his contract with Fox News for four-year worth $32 Million. He rejected the offer of ESPN of $30 Million.

Soon after graduating from the University, Sclafani joined Izod Lacoste as assistant accessories director. She worked there for two years and joined Bally of Switzerland worked as In House, Public relations Director. After there for a decade, The celebrity wife joined Edelman public relations worldwide as their Vice-President.

In 2005, Ernestine started working as Vice-president and Consumer Media Relations for Weber Shandwick. After working with the company for fourteen years, She moved to Ernestine Sclafani Bayless PR and worked as its Principal.