Erica Stoll is a former employee at PGA of America. She worked as the Manager of the Championship Volunteer Operations for the organization in 2011. Erica is better known as the wife of a famous professional golfer from Northern Ireland Rory McIlroy who is also a member of both the European and PGA Tours. The love birds have been married for less than four years as of 2021.

Erica Stoll was born in 1987 in Rochester, New York. She is among the two children born to her parents. She has a sister named Natalie Stoll. After graduating from West Irondequoit High School, Erica enrolled at Rochester Institute of Technology and graduated in 2008.

Erica and Rory walked down their wedding aisle in April 2017 at Ashford Castle in Cong, County Mayo. They had a lavish and beautiful wedding ceremony where they invited only a few members from both the families and some close friends. The love birds had been dating each other for more the three years before their marriage. 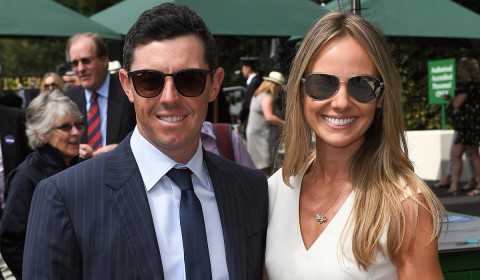 The duo engaged while on holiday in Paris in December 2015. In early 2020, Erica and Rory opened about expecting a baby shortly. The pair welcomed their first child, a daughter, Poppy Kenddedy Mcllroy, on August 31, 2020. It's been more than four years of their marriage, and there have been no rumors of the couple having ups and downs in their marriage life.

Although this may be Erica's first love life, her husband, former World No.1 golf player Rory, was previously engaged to his former fiance, Caroline Wozniacki. The duo started dating each other in 2011 and then got engaged on December 31, 2013. However, this happy-looking relationship never remained the same after their engagement, and the duo called off their engagement on May 21, 2014.

Erica is not involved in any economic activities; she lives a lavish life through her husband's successful career as a golf player. Rory McIlroy has an estimated net worth of more than $100 Million. He is ranked 7th in the all-time highest-earning golfer in the PGA Tour, where Tiger Woods and Phil Mickelson top the list.

Last year, Mcllroy took home more than $52 Million as his prize money, which ranked him 44th in the highest-earning celebrity list. He earned $22 Million as his salary and winning bonus and $30 Million from Endorsement deals. The World No 1 golf player has several sponsors like Nike, Omega, TaylorMade, UnitedHealth Group, and a few more.

In 2019, Rory scored one of the sport’s highest payouts when he won the 2019 FedEx Cup. The title gave him $15 million. Totaling his earning from PGA Tour only, It sums to $54 Million. In 2012, He bought a lavish Manion for $10 Million in Palm Beach Gardens, Florida.