Eric Musselman is one of the famous names in the field of basketball. Currently, he is serving as the head coach of the men's basketball team of the University of Arkansas, Arkansas Razorbacks. Before that, he had worked as the head coach of some popular National Basketball Association’s (NBA) teams that include the likes of Golden State Warriors and Sacramento Kings.

Born in 1964, Eric celebrates his birthday on the 19th of November every year. He goes by the birth/full name of Eric Patrick Musselman. He is the son of another famous former basketball head coach, Bill Musselman. He spent most of his childhood traveling around different places such as Minneapolis, Minnesota, San Diego, California, and Cleveland, Ohio. During his time in Ohio, he enrolled at Brecksville-Broadview Heights High School. Later, he went on to study at the University of San Diego.

After earning success as a basketball player for the Brecksville-Broadview Heights High School’s basketball team and the University of San Diego’s basketball team, Musselman decided to take a step further and became a coach.

He started his coaching career in 1989 as the general manager of Rapid City Thrillers of the Continental Basketball Association (CBA). There, he worked very hard and became the fastest coach to win 100 games.

Following that, in 2002, he got hired as the head coach of the Golden State Warriors—also coached the team in the 2003-04 season. After that, he coached different teams such as Sacramento Kings, Reno Bighorns, and LA D-Fenders. In 2012, all of his hard works gave him the fruit as he was named the Coach of the Year.

Soon, Musselman went international and coached international teams such as the Dominican Republic National Team, The US and Team China, and The Venezuela National Team. After making such an impressive coaching career, he returned to the national level.

There, he coached the team for almost 4 years and was able to take the team to greater heights. Later, when his tenure with the Nevada Wolf Pack ended, on April 7, 2019, he was called up by Arkansas Razorbacks to be their head coach. 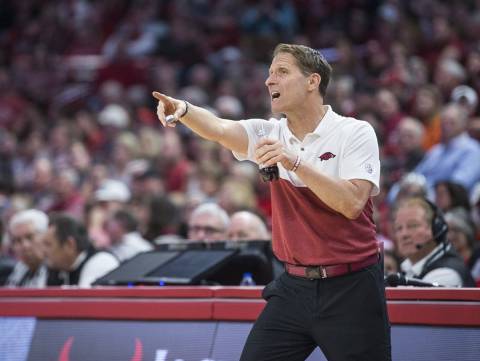 Ever since that day, Mussleman has been teaching everything he has learned as a player and as a head coach in the past years. And, with his coaching, the Arkansas team has managed to achieve a lot.

The renowned coach is amassing a huge sum during his time as a head coach for Arkansas Razorbacks. As per his contract signed in 2019, he receives $2.5 million per year, which makes $12.5 million for his five-year deal with the team. Eric also receives plenty of other performance-based incentives.

But that’s not it, as he had amassed a lot of money from other teams before his contract with Arkansas Razorbacks began. So, how much is his net worth? Unfortunately, no details could be found as to what Musselman’s exact net worth is, as the coach has not disclosed anything about it.

The former head coach of Golden State Warriors is in a happy marital bond. He is married to Danyelle Sargent Musselman, a woman who loves sports much like Musselman. Danyelle is a former broadcaster of Fox Sports, ESPN, and the NFL Network.

Together, the husband and wife are blessed with three children, two sons named Michael and Matthew Musselman and a daughter named Mariah Musselman. 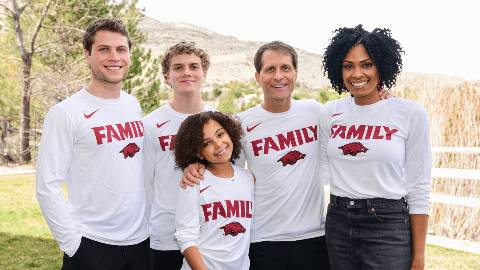 Eric Musselman with his wife and three children SOURCE: arkansasrazorbacks.com

As of now, the family of five reside happily in their beautiful residence.