Emmanuel Bonaventure Dennis is a Nigerian professional footballer, playing Premier League side Watford as a striker. Before, he had a stint at Club Brugge (2017-2021) and Zorya Luhansk (2016-17). A full international since 2019, he is representing Nigeria's national team and has been capped thrice in total.

How Much Is Emmanuel Dennis's Net Worth In 2021?

As of 2021, Emmanuel Dennis is signed to the Premier League club, Watford. Though the contract period is made public the financial information such as salary is yet to come out. According to the source, the average wage of a Premier League footballer is just over £60,000 a week, which equates to more than £3 million a year. 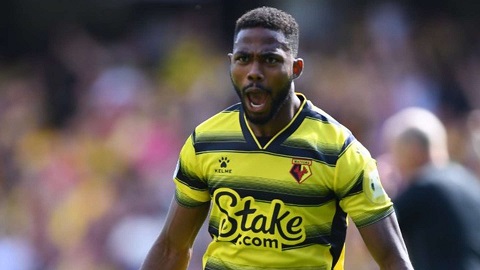 There is no report in the media about Dennis's relationship and affairs. Watford's No. 25 striker is an eligible bachelor in the football world. Pretty famous on Instagram with 292k followers his post is all about football. Seems like the hunk is focused on his football career rather than anything else.

After finishing his youth career at Accademia di Abuja (2010-2016), Dennis signed with Ukrainian Premier League club Zorya Luhansk, in March 2016. On 24th July 2016, he made his debut in a game against Olimpik Donetsk, scoring the opener in 3–0 wins. He began the season on the bench mostly prior to being given his UEFA Europa League debut to Feyenoord on 3 November, which ended 1–1.

On 11 December, Dennis scored his second goal in a 2–0 win over Stal Kamianske, which grabbed attention from both Manchester City and an unknown Bundesliga side, for signing him in the winter transfer window. However, he ended up staying with Zorya for the rest of the season. Overall, he gave 22 appearances with six goals.

On 1 October 2019, Dennis scored twice in a 2–2 draws over Real Madrid at the Santiago Bernabeu Stadium in the group stage of the 2019–20 UEFA Champions League season.

On 25th January 2021, Dennis was loaned out to FC Koln until the end of the season, where he made nine league appearances during his time in Germany.

On 23rd June 2021, Dennis and Watford agreed on a five-year contract. On 14th August 2021, he scored on his Watford debut in their league opener over Aston Villa, where Watford victory 3–2.