Elizabeth Szokol is a rising American professional golf player. She has been playing at the professional level since 2017. Szokol currently plays under the LPGA tour. Elizabeth started her career playing in the Symetra Tour. She is yet to win a major tournament in the professional career.

Elizabeth Szokol was born in 1996 in Winnetka, Illinois. She is the daughter of Pam Szokol and her husband, Joseph Szokol. Szokol holds American nationality and is of white descent. Szokol graduated from New Trier High School and enrolled at Northwestern University.

Career Earnings, Net Worth, and Sponsors

Elizabeth Szokol has an estimated net worth of more than $300,000. She has been accumulating most of her net worth through her successful career as a professional golf player. Szokol is very much early in her career. She shall be adding much more to her net worth in the coming days. 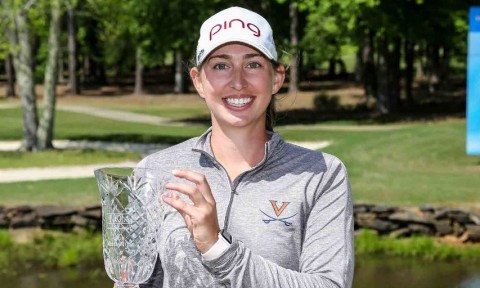 Szokol, along with her Symetra Tour Title SOURCE: Inside Golf

A golf player does not need to win a series or event to earn money. They are paid based on their score at the end of the series. Szokol earned $105,000 in her rookie year when she played in twenty games and made cuts in ten of them. She recorded a top-10 finish, a tie for sixth at the Aberdeen Standard Investments Ladies Scottish Open.

Who is Elizabeth Szokol Dating? Know About Her Boyfriend and Relationship Status

Elizabeth is very much early in her career. She seems to be focused on making her career rather than spending time with people. Szokol is single as of early 2021. the golf player is very close to her family and friends and spends most of her free time with them.

Elizabeth started playing golf from a very early age. She was part of her High School golf team. Szokol was ranked second in her 2012 class within the state of Illinois by Junior Golf Scoreboard. In her amateur year, Elizabeth won the 2010 Illinois State Championship and Posted top-10 finishes at the Illinois State High School Championships in her junior and senior year.

After completing High School, Elizabeth committed to play golf for the Northwestern University. She played in eight events in her freshman year and finished the season with a 76.70 scoring average with three rounds of par or better. Szokol helped the university tie for first and claim a share of the first conference title in program history. Elizabeth transferred to the University of Virginia for her junior year. She completed her university career and was named an honorable mention All-American by the WGCA.

Elizabeth made her professional debut in the Symetra Tour and played in the event for two seasons. She later gained her LPGA card in 2019 and has been playing in the event since then.