Eliud Kipchoge is a long-distance runner by profession and represents Keny in the world running competitions. In Berlin Marathon in 2018, he set the world record for marathon completing the distance in 2:01:39 hours.

Kipchoge is an Olympic gold medalist who won the marathon in 2016 in Rio de Janeiro and recently in Tokyo. Besides, he has won gold medals in 5000m in other competitions including World Championship in 2003 in Paris and several World Marathon Majors.

Undoubtedly, the best marathon runner of this decade, the 2020 marathon gold medalist has come a long way from running in his neighborhood for a living to winning gold at Olympics. Let's explore Kipchoge, his family roots, married life, and earnings throughout his career.

Who is Eliud? (Family and Early Life)

Eliud Kipchoge was born on 5 November 1984 in Kapsisiywa, Nandi County, a rural village in Kenya. He was raised by his mother only since his father passed when he was very young. His mother used to teach kids in kindergarten and later started selling local brew. He has 3 siblings and he is the youngest of all.

He attended Kaptel Secondary School and graduated in 1999. He started running at an early age and used to run about 2 miles daily while going and coming from the school.

Eliud is 5 feet 5 inches in height and currently weighs around just 56 kg.

How Much Is Eliud Kipchoge's Net Worth In 2021?

As per the sources, Eliud Kipchoge has an estimated net worth of $3 million. He accumulated most of his earnings from participating in different tournaments and prizes and bonuses from it. Also, he is also associated with various brands and endorsements. 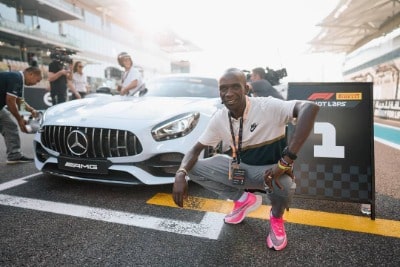 The self-made Kenyan millionaire's major earnings from the marathon in the Olympics are when he won about £39,000 by winning it.

One of the 2020 Olympic marathon gold medalists is Nike. Nike contributes largely to his total earnings. Kipchoge is also the brand ambassador of Isuzu, a motor vehicle manufacturer. Besides, he has enough investments in real estate and agriculture.

Kipchoge's Married life with Grace; Do they have Children?

Eliud is currently happily married to his wife Grace Sugutt. Grace was born in Kenya and a great fan and supporter of her husband. Eliud Kipchoge's wife constantly supports her love for Eliud by attending his competitions. Eliud and his wife Grace are the proud parents of 3 children. However, no detailed information about their children is available to the public.

There is no news about Eliud and Grace having disputes that could lead them to their divorce. It seems the couple are enjoying their married life with their kids,

Eliud started running at an early age but he grabbed his first title by winning World Cross Country Championships Junior race in 2003. Later, the same year,  he won World Championships in 5000m in Paris. He also participated in Olympic Games for Kenya in 2004, but couldn't win the gold. He settled at Bronze. He first won the gold medal in 2016 in Marathon in Rio de Janeiro.