Elias Pettersson is a professional Swedish ice hockey player who was drafted in the 2017 NHL Entry Draft by Vancouver Canucks. Currently, he plays for the Vancouver Canucks of the National Hockey League as their forward.

Elias Pettersson is a member of Sweden's national ice hockey team and is also the winner of the Calder Memorial Trophy. It seems that you are curious to know about his personal life, career earnings, salary, and net worth. Everything about him is mentioned below in detail.

Well, Elias Pettersson is a handsome guy who is originally from Sweden. Elias is neither married nor engaged till date. Talking about his relationship status, he is currently dating his lovely girlfriend. As per some of the sources, he has been dating his girlfriend since his high school days.

Pettersson is secretive in nature when it comes to his relationship status which is why he has never shared any details about his probable girlfriend. Also, he rarely talks about his love life and relationship in the media which clearly suggests that he keeps his personal life hidden from the general public.

How much is Elias Pettersson's Net worth and Salary?

Elias Pettersson began his professional NHL career in 2017 so he hasn't earned as much as other senior players. However, his career earnings are also quite satisfactory and so far he as collected a decent amount of net worth.  Pettersson's net worth is estimated at around $5 million as of 2019. 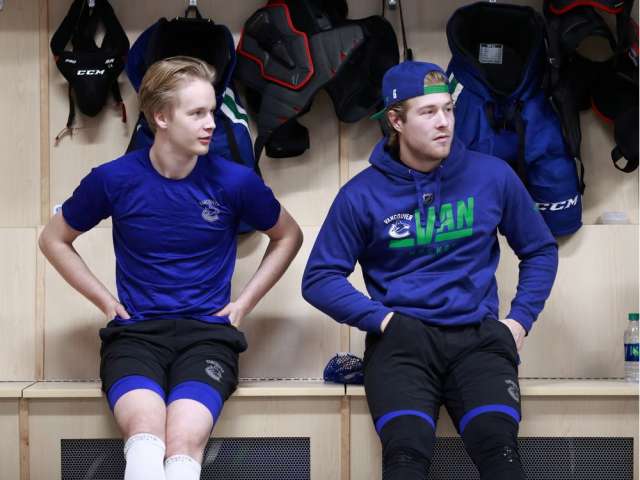 Elias Pettersson with his friend Brock Boeser SOURCE: The Province

In addition to his net worth, Elias is earning an annual salary of around $3.7 million this year whereas he received the same salary in bis previous season. As per some of the sources, he is among the list of the highest-paid newcomers in the NHL.

Well, there is not much to talk about his contract as he is his NHL career as he started NHL career just two years ago. Currently, he is playing under the contract for three years signed on May 25, 2018, and the contract amount is  $11.325 million.

Who is Elias Pettersson? Know about his Parents and Childhood

Well, Elias Pettersson is a native of Sweden who was born on November 12, 1998, in Sundsvall, Sweden to parents Torbjörn and Irene. Pettersson had an awesome childhood with his sibling Emil who also plays ice hockey.

Talking about his parents, his father was a Zamboni driver and he always supports Elias to his career growth. His grandfather Toivo Jokelainen migrated from Finland, as a Finnish war child.

Elias Petterson was selected by the Vancouver Canucks in the 2017 NHL Entry draft in 5th overall pick. Since his draft, he began his NHL career with the Canucks team of the National Hockey League (NHL). He scored his 1st NHL goal against Mike Smith in 2018.

He was also awarded October rookie of the Month title and Second star of the week in 2018. During his 2018 season, he got injured and was replaced by Jesperi Kotkaniemi.  Apart from his NHL career, he also plays for the Swedish national ice hockey team.

Some of the famous NHL players biographies are available at the site Playerswiki.com.