Alexander Edler is a professional Swedish ice hockey player who is the alternate captain of the Vancouver Canucks and plays in the position of defense. Edler was selected in the 2004 NHL Entry Draft and he started his National Hockey League (NHL) career since 2004.

Alexander Edler is also a member of the Swedish National ice hockey team whereas he is well known for "calm on-ice demeanor and strong slapshot."Do you want to know about his luxurious lifestyle, salary, net worth, wife, children, and married life? If you are willing to do so, just enjoy reading the full article.

How Much is Alexander Edler's Salary and Net Worth?

Alexander Edler is among the list of the highest-paid players of the Vancouver Canucks. He collected a decent amount of net worth so far and his current net worth is estimated at around $40 million. As far as his annual salary is concerned, he received a salary of around $7,000,000 in this season.

Previously, in 2018 he received $4,500,000 as his annual salary. Apart from all this, he earned a sum of around $50 million from his entire NHL career so far. Despite his earnings, he has also paid a huge amount as fine in 2013. He paid a sum of around $182,927 and was also suspended for three games for Unnecessary Roughness on Tomas Hertl.

Currently, Alexander Edler is playing under a two-year contract worth $12 million which he signed on June 20, 2019. Before this contract, he had a six-year contract signed on January 16, 2013, worth $30 million. Moreover, he also signed a contract in 2008 with the Canucks for $13 million.

Edler's first contract with the NHL team Vancouver Canucks was in 2006 worth of $1.65 million.

Famous players Relationship status and personal life is always a matter of discussion among their fans. Alexander Edler is a happily married man and he currently lives with his wife and daughter. He exchanged vows with his girlfriend Amanda Lombardo in a luxurious wedding ceremony. 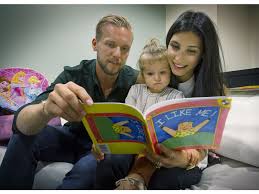 Alexander with his wife and daughter SOURCE: Vancouver Sun

The wedding ceremony was attended by their friends and family members. Edler and his wife are blessed with a beautiful daughter named Emme Rose who currently lives with them. Alexander and his spouse are enjoying their married life as they seem quite happy with each other. 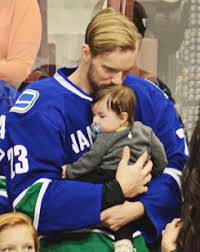 As we go deeper in their married life so far they haven't reported any disputes in their marital life. From this, it is clear that the husband-wife will be together for their lifetime as there are no reports on divorce as well. You will be surprised to know that the couple is together for more than a decade.

Alexander Edler doesn't seem so much fond of using social media as there are no social media accounts found associated with him. You will find some accounts made by his fans containing some of his professional and personal life photos.

When was Alexander Edler born? Know about his Parents and Childhood

Well, Alexander Edler is a native of Sweden who was born as Ulf Niklas Alexander Edler on April 21, 1986,  in Ostersund, Sweden. Talking about his siblings, he has a brother Jens and a sister Katarina. He always got support from his parents and he started playing hockey when he was just 6 years old.

Alexander Edler is a professional Swedish ice hockey player who is the alternate captain of the Vancouver Canucks and plays in the position of defense. Edler was selected in the 2004 NHL Entry Draft and he started his National Hockey League (NHL) career since 2004.

Some of the other alternate captains of Canucks alongside him are Brandon Sutter, Bo Horvat, and Christopher Tanev. If you are willing to know more about some other NHL player, just visit the site Playerwiki.com.