Eduard Atuesta is a rising Columbian professional football player. Currently, he is playing at the Brazilian football league, Campeonato Brasileiro Seria A, for Palmeiras. Atuesta turned professional in 2016 with Independiente Medellin. Eduard plays as a midfielder for his club and country.

Eduard Atuesta was born Eduard Andres Atuesta Valesco on June 18, 1997, in Velez, Columbia. He has not uttered a single word about his parents and early life. Atuesta started his football career in the early days and did not continue his formal education. Eduard stands five feet and eleven inches tall and weighs 80 kg.

Eduard Atuesta has an estimated net worth of more than $500,000. He has earned most of his net worth through his football career and other deals. A football player makes a handsome amount from their sponsorship and advertising deals. Eduard received an annual salary of $475,000 while playing with Los Angeles FC in 2021. 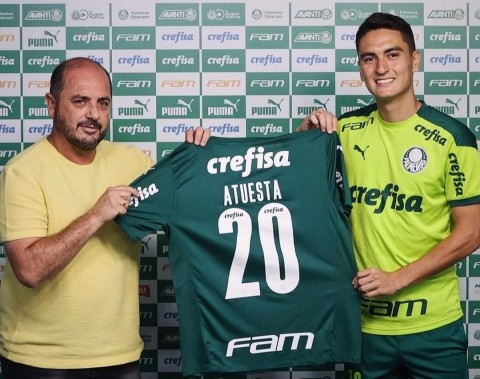 Atuesta signed with Los Angeles FC in 2019 with a guaranteed $493,000 as his basic salary. Eduard received £7,300 as his weekly wage from his contract. The player had an annual wage of £28,080 while playing for Deportivo in Columbia. He is very early in his career and will be making millions in the future.

Eduard is a married man living a happy married life and his wife and children. Atuesta exchanged his wedding vows along with Daniela Camelo. The duo walked down their wedding aisle in June 2020. They had a private wedding ceremony in front of family and friends. 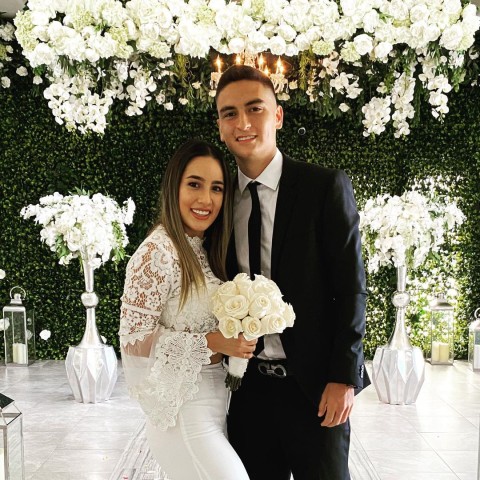 In October 2021, Daniela opened up about expecting their first child through a post in her Instagram timeline. In November 2021, The family of two extended to three with the birth of a son Matthias. Eduard is pretty private about his son and has not shared much about him.

Eduard started training with the youth academy of Independiente Medellin. He represented the youth academy in numerous divisions and earned his senior team call in 2016. Eduard made his professional debut and was part of the 2016 Categoria Primera, A title-winning team. The player signed a two years contract with the club. He appeared in twenty-nine games for the club.

Atuesta was loaned to Los Angeles FC for the 2018 season. He appeared in twenty-five games and scored one goal. After having a good season with the club, The player extended his contract, and the club announced that they had signed Atuesta permanently on a three-year deal.

Eduard appeared in seventy-one games for the club and scored six goals. In late 2022, Atuesta was sold to Palmeiras on a four-year contract.

Eduard has represented the U20 team in 2017 and appeared in seven games. The player later appeared for the U23 team in six games and scored one goal. In February 2019, He earned U.S green card and qualified as a domestic player for MLS roster purposes.