Edinson Cavani is a proficient Uruguayan soccer player. Previously, he has played for some world top clubs such as Napoli, Paris Saint-Germain, Manchester United, and Palermo in his footballing career. Presently, the Uruguyan international is serving the Spanish club Valencia in La Liga as a striker. Moreover, he is given jersey number 7 for his current team.

Not to mention, Danubio's outcome Cavani is a crucial part of the Uruguay national team. His finishing and mastery have led him to a successful name in the football world. Cavani has a wide range of skills, including mindblowing pace, opportunistic and skillful prolific forward expressed him as a modern striker. For Uruguay, Cavani got his debut match against Colombia as a substitute player on 6 Febuary 2008. He is a sensational player that has nursed his nation in changing the game in thier hands.

Know About His Parents And Family Background

Professionally, he is known by the name Edinson Cavani. However, his full name is Edinson Roberto Cavani Gomez. The 35-year-old striker was born on 14 February 1987 to Uruguayan parents. However, his parental grandparents are of Italian ancestry. Hence, he also holds an Italian passport. He is a citizen of Uruguay and Italy. His grandparents are Maranello natives who later shifted to Argentina and Montevideo in 1929. The skilled footballer is the son of Luis Cavani and Berta Gomez.

His family consists of five members, including his older brother Walter Guglielmone and younger brother Christian Cavani. All the Cavani brothers are involved in soccer. Walter is a former professional footballer who played for numerous clubs as a striker. For your information, Cavani is multilingual and speaks French, Italian, and Spanish. Furthermore, he is an Evangelical Christian. When he was a child, he looked up to former Argentinian striker Gabriel Batistuta.

His Annual Earnings At Valencia

Edison Roberto Cavani Gomez is a hight devoted, work ethic person. Whatever he is now, it is all because of his dedication and desire for his passion. He is known as the most sensational Uruguayan footballer that football has ever got. The athlete has earned millions of dollars from his soccer career. Salary Sport claims that he allegedly makes £1,60,000 weekly, and yearly, he makes excellent pay of £8,320,000 from his current team. Notably, he has been making massive fortunes from his past teams too. His highest career earnings he made were in Paris Saint-Germain, where he was credited £16,588,000 per annum. Since 2014, he has been generating his pay in millions of dollars. 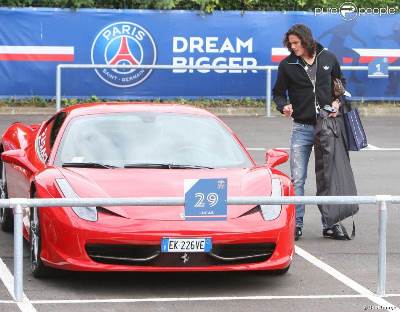 Now it's 2022; we can confidently express that his net worth is extraordinary, viewing his salary details. Indeed, per the sources, his net worth is around £99,164,000. With that amazing pay, he is spotted as the highest-paid Uruguayan player of this generation. With that income, he owns several mansions inside and outside of his home country. Because of his popularity and fame, many big companies and birds wanted to work with him, which resulted in him making a handsome amount of money too.

Apart from his club career, Cavani makes riches from his national team, endorsement deals, and Commerical ads. Furthermore, his current market worth listed by Transfer market on June 15, 2022, is €4 million.  His highest active career valuation was €60 million back on 22 July 2013. In addition, Puma is the sporting brand that sponsors him.

Is He Available  On Social Media Sites?

He has a massive following of 9.5 million. Likeswise, his Twitter handle is @Edi Cavani Official. Via these outlets, Cavani keeps his fans up to date about his professional and personal life.

What's The Reason Behind His Divorce With His Ex-wife?

For your Concern, Cavani was a married man. He was married to Maria Soledad Cabri Yarrus, with whom he had two lovely sons Bautista, born on March 22, 2011, and Lucas, born on March 8, 2012. But his marital status was not successful.  Due to personal reasons, the duo ended up splitting in 2014. After four years of his divorce, he finally got the love of his life Jocelyn Burgadart with whom he shares a lovely relationship status. 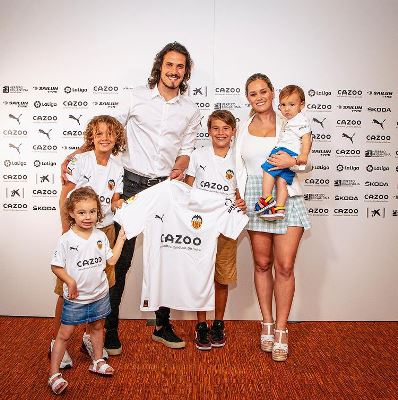 At the moment, the former Manchester United player Cavani is in a relationship with his gorgeous Girlfriend Jocelyn Burgadart, a model and Samba dancer. The duo met each other in the Bella Union as Jocelyn was part of the Bella Union. The couple started dating in 2018.  The lovebirds seem very serious about their relationship. They often share snaps on their respective online handles. They love sharing their love updates with their fans via Instagram. We hope their romantic love ended in a joyful marriage.

Danubio is his very first club Salto-born prudent player played. He played 25 games from 2005 to 2007. Afterward, singing fours deal in 2007, he joined Palermo for a fee of €4.475 million and got his debut match on March 11, 2007. For Palermo, Cavani appeared in 109 league games scoring 34 goals. However, in his final year, the club assured him of sending him on loan to Napoli with an option to buy in July 2010. He played three consecutive seasons with the team. After his release, he joined Ligue 1 side signing for Paris Saint-Germain on July 16, 2013, for €60 million.

Likewise, he joined Manchester United in 2020 for two years. Joining Manchester United was not a good move for him as he was not featured more in the competitions. With 41 appearances and 12 goals in his name, he left United and joined Valencia on August 29, 2022, agreeing on a two-year contract.