Ed Orgeron is a well-known American football coach. He worked as the head coach for the Louisiana State University in the Western Division Conference. Orgeron has worked with the team since 2016. Ed led the LSU in the 2019 National, SEC Western Division and SEC title win.

Ed Orgeron was born Edward James Oregeron Jr. on July 27, 1961, in Larose, Louisiana. He is the son of Edward James Oregon Sr and his wife Cornelia "Co Co" Orgeron. Ed has a brother Steve. He is of Cajun descent. Orgeron graduated from South Lafourche High School and enrolled at Louisiana State University.

Ed Orgeron has an estimated net worth of more than $10 Million. He credits most of his net worth through his successful career in American football. While working for Louisiana, The coach was among the second-highest-paid coaches in the league with an annual salary of $9,012,917, right behind Nick Saban. In January 2020, Ed signed a six-year contract extension with a base annual salary of $6 Million with the Tigers. 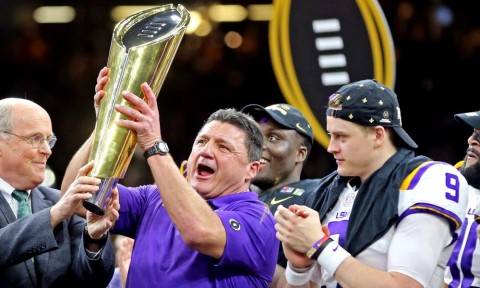 Ed was fired in late 2021 but will be receiving his base salary until his contract expires in 2026. Unless they pay him more than $17 Million at once. Orgeron will be joining one of the teams in the future and adding a huge net worth.

Ed Orgeron is believed to be single as of early 2022. The former head coach does not show much presence in social media and is not found dating anyone in public. In 2020, Orgeron and his former wife Kelly filed for divorce after Ed was accused of not responding to an assault event while working as the head coach for the tigers. Ed along with his former wife, Kelly and their children SOURCE: The Advocate

Ed and Kelly walked down their wedding aisle in 1997. Shortly after the wedding, the love birds had a twin, Parker and Cody. The family of three lived a happy and blissful married life. Most of his children are following their father's successful footsteps. Orgeron was married and divorced before marrying Kelly. The head coach was married to Colleen Orgeron for three years, from 1992 until 1994. They had a son, Tyler Orgeron. Ed and Colleen separated in 1994 and moved on.

In 2008, NFL side New Orleans Saints hired him as their defensive Line coach. However, He moved to USC in 2010 as their assistant coach. In 2014, Louisiana State University hired him as their defensive line coach and was appointed as their head in 2016. In the next two years, Orgeron left a good impact in the league and helped the team win the 2019 SEC title. Eventually, after the sexual harassment case, Ed agreed to leave the program at the end of the 2021 season.