Dylan Howard is one of the familiar faces when it comes to basketball, especially in the university basketball field. Howard is a professional basketball player turned coach who is using all of his expertise as the head coach of the Alabama A&M Bulldogs men's basketball team. Before working there, he had coached several other Division III and Division I basketball teams.

The American basketball coach, Dylan Howard, hails from Fort Wayne, Indiana, United States. There are no details on his early life and age as he is yet to disclose them. Much like that, he has not given any insight into his parents' and siblings' details.

However, it is known that Howard went to the University of Alabama at Birmingham and graduated with a bachelor’s degree in criminal justice and then enrolled at Hardin-Simmons for his master’s degree in sports recreation and management. 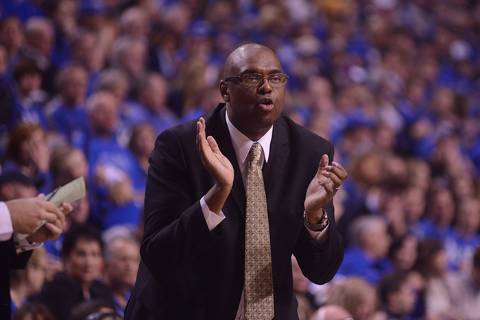 His last appearance with the team came in 1989 when he played in the National Invitation Tournament semifinals, a seasonal NCAA college basketball tournament. Following that, he quit playing basketball and began focusing on coaching other players.

In 1996, he received his first call to work as a top assistant and recruiting coordinator for the University of Saint Francis men’s basketball team. There, he worked for four years, and in 2000, he joined hands with the Robert Morris Colonials men's basketball team as its assistant coach.

One year later, he left his position at Robert Morris and signed a contract with Hardin–Simmons. As their head coach, Howard relished some amazing victories as well as some tough losses. And, the process continued for seven long years until he left the position in 2008.

In 2017, he joined Alabama A&M Bulldogs men's basketball team as an assistant coach. A year later, on May 17, 2018, he was appointed as the interim head coach.

Later, his hard work gave him a sweet result as he was officially designated as the head coach of the team on March 3, 2019.

Whether as an assistant coach or a head coach, Howard has managed to stick with some team for a very long time, all thanks to his brilliant coaching techniques. Considering that, it must be sure that he is paid according to his amazing talent.

Well, as per some sources, it has been known that Howard earned an estimated income of $90,000 during his one-year run as an assistant coach for Alabama A&M Bulldogs men's basketball team.

But that’s just his base salary, not his net worth. So, how much is Howard’s exact net worth? Nothing can be said, as of now, regarding the coach’s net worth, as it is yet to be disclosed.

The Fort Wayne, Indiana native basketball coach is a happily married man who shares a very long bond with his lovely wife, Nicole. Trey Not only that, but the husband-wife duo is also blessed with an adorable daughter named Danielle Blanco.

As for the details of Howard’s wife, she hails from Pittsburgh, Pennsylvania. Speaking of the married couple’s daughter, she is a grown-up woman who has already completed her bachelor's degree from Samford University in Birmingham and master’s degree from Morehead State.