Dylan Lee Floro, famous as Dylan Floro, is an American baseball player currently signed to the Los Angeles Dodgers of MLB as their No. 51 Pitcher. A professional since 2016, he has played for the Tampa Bay Rays (2016), Chicago Cubs (2017), and Cincinnati Reds (2018).

The twenty-eight years old hunk is married and has two daughters.

Almost five years as a MLB pitcher, Dylan Floro has made a decent fortune. As of 2019, his net worth is over $0.5 million.

Currently, he is pitching side Los Angeles Dodgers where he summoned $510,384 as his salary for the 2019 season. Roosters such as Clayton Kershaw, Justin Turner, and Kenley Jansen are the highest-paid athletes from the team.

Besides, right after his MLB draft in 2012, he went on to plays for various minor leagues until 2016. As reported, the minor league players earn about $10,000 per month.

Dodgers – No. 51 Pitcher, is married to Amber Dutra. The couple tied the knot on 17th October 2015, in an intimate wedding ceremony.

Earlier the month On 11th September, the couple has their first daughter, Ryleight Ann Floro, who weighed 6 pounds, 13 ounces, and 20 inches long. 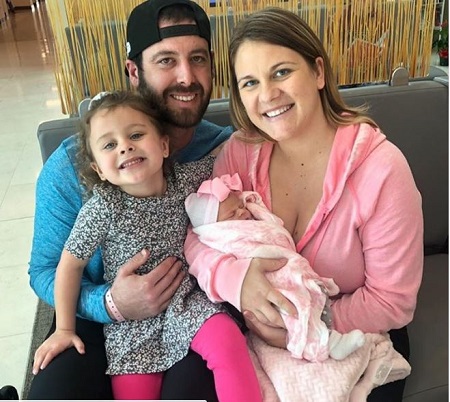 By 2019, the family has grown by one following the birth of their second child Hadlee Rose.

Matter of fact, Dylan and Amber has pretty set their personal life private. Alike other celebrities, the pitcher doesn't share their family photograph while his wife has set his Instagram account private.

As reported,  Amber Dutra is a native American who was born to Kim Freitas and Frank Dutra Jr.

Floro was born as one of three sons to M.V. Raider alums Kent and DeAnn Floro, who now reside in Merced, Calif. His grandparents are North Platte natives, and Dylan's social media account includes “huskers.” The Floro family has lived in California for several years with Dylan graduating from a California high school.

Floro has two brothers: Elder brother, Brock, who is currently a graduate assistant coach for the Titans and a younger brother, Kadon.

Upon graduation from Buhach Colony High School, Floro was drafted in the 20th round of the 2009 MLB draft by the Tampa bay Rays. However, he did not sign; rather, he attended California Statu University Fullerton and played for the college baseball team.

The following year on 17th January, he was waived by the Rays, which was later claimed off by Dodgers on 4th August that same year.

On 3rd January 2018, he inked a contract with the Cincinnati Red. Further, he was traded back to the Dodgers on 4th July 2018.