Dwane Casey is a well-known American basketball coach. He has been working as the head coach for the Detroit Pistons in the National Basketball Association. Casey worked as the head coach of the Minnesota Timberwolves and the Toronto Raptors. Swane won the 2019 NBA Coach of the Year Award.

Dwane Casey was born Dwane Lyndon Casey on April 17, 1957, in Indianapolis, Indiana. He is among the two children born to his parents. Casey rose to fame only after his successful career so, much information about his early life is under the radar. Dwane graduated from Union County High School and then enrolled at the University of Kentucky. Casey stands six feet and two inches tall and weighs 88 kg.

Dwane Casey's Career in the NBA

Dwane listed his name for the 1979 NBA draft but went undrafted. The player was part of the NCAA Champion in 1978 and was NIT Champion in 1976. Shortly after that, Casey started working as the assistant coach for the University of Kentucky. He moved to Western Kentucky, working as their head coach in 1980.

Casey worked with the team until 1985 and then moved back to the University of Kentucky as their assistant coach. In 1989, For some scandal, NCAA banned him for five years. Dwane moved to Japan and started working as the head coach for the Sekisui Chemical and Isuzu Motors Lynx. In 1994, Dwane returned to the NCAA, working as the assistant coach for the Seattle Supersonics.

How Rich is Dwane Casey? Know About His Net Worth, Salary, and Contract

Dwane Casey has an estimated net worth of more than $20 Million. He has been able to accumulate most of his net worth working as the head coach. In 2018, Casey signed a five-year- $35,000,000 contract with the Detroit Pistons, including an annual average salary of $7,000,000.

In 2016, Casey extended his contract with the raptors to three-year worth $18 Million. He is ranked among the highest-paid NBA coaches.

Dwane is living a happy married life along with his wife and their children. Casey tied his wedding knot with his longtime girlfriend, Brenda Casey, in 2006. They went to Saitama, Japan, for their honeymoon. 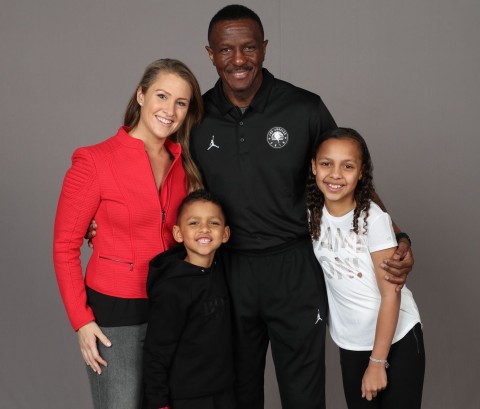 Dwane along with his family at an event SOURCE: Toronto Star

Shortly after the wedding, the duo welcomed two children, a son Zachary and a daughter Justine. The Family of four is living a happy married life. Brenda works as a sports marketing executive with the Kaufmann Sports Management Group. She is very much supportive of her husband.