Randy "Duke" Johnson Jr. popular as Duke Johnson is an American football running back for the Houston Texans in the National Football League. He started to play professionally from 2015 after being picked 77th overall in round 2 by Cleveland Browns.

Duke was born on September 23, 1993, in Miami, Florida to his parents Duane Mitchell and Cassandra Mitchell. He completed his high school from Miami Norland where he initiated to play football and also played for the college team at Miami University.

An American native running back seems to be single. However, it's hard to say about his exact relationship status because even though he is active on social networking sites, he has never talked about his affairs and relationship.

It seems like Duke Jhonson is focused on his game only, he is young and strong and there is no previous record of Duke about his marriage, affairs, and engagement.

Duke's father's name is Randy Jhonson Jr. who was passed away in 2008 when Duke was 14 years old and his mother's name is Cassandra Mitchell. After his father's death, his mother got the second marriage with Miami Police detective Duane Mitchell. 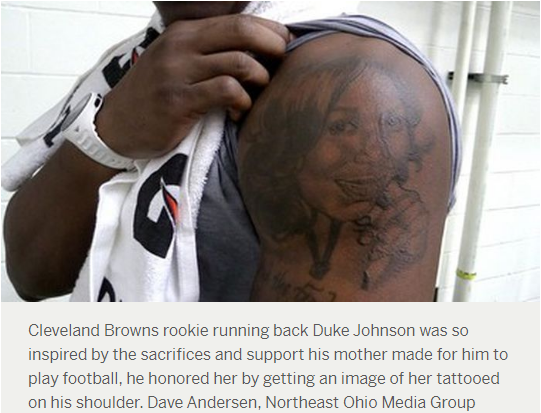 He loved his parents very much and his father's death was so hard for him because he was just 14 at that time and at the same time his mother got another marriage but his love for his mom never faded away. He has made a tattoo on his soldier to give tribute to his mother.

Trade war between the NFL Clubs for Duke

It was the 2015 NFL draft, the Dallas Cowboys need to have a running back and Darren McFadden was picked up by cowboys to fulfill their need but they know that's just not enough for the team and one name consistently connected with cowboys was Duke Johnson.

Dallas couldn't pass up the chance to select the most talented pass rusher in the class with pick No. 60 and Johnson was selected 17 picks later by the Cleveland Browns.

Four years later, the Cowboys again tried to acquire Johnson after he got transferred to Houston Texans and still the trade rumor is surrounded around Duke so in response to this kind of rumor Browns coach Freddie Kitchens said:

Johnson was traded to the Houston Texans on  August 8, 2019, for a conditional 2020 fourth-round pick that can become a third-round pick if active on the Texans roster for 10 games.