Dominik Szoboszlai is a Hungarian professional footballer who is currently signed to the Bundesliga side RB Leipzig as a midfielder. A full international since 2019, he has earned 15 caps with 3 goals for the Hungary national team.

Szekesfehervar, Hungary native, Dominik Szoboszlai was born on 25th October 2000, under the star sign Scorpio. He is the son of Zsanet Nemeth and Zsolt Szoboszlai. He has a sister. The twenty years old stands 1.86 m (6 ft 1 in) tall.

How Much Is Dominik Szoboszlai's Net Worth In 2021? Salary & Market Value

After Dominik Szoboszlai signed to RB Leipzig in January 2021, his salary became tripled. While his salary. While at Red Bull Salzburg, he earned 2.5 million euros and now his annual salary is 7.5 million euros per year.

His current market value is €25 million, updated on 1st June 2021. His net worth is approximately $5 million.

Is Dominik Szoboszlai In A Relationship?

As per reports, Dominik Szoboszlai is currently dating Fanni Gecsek. It's been few month that the duo began dating. However, there is very few information about them in the media. The duo chose to keep their love story low key. 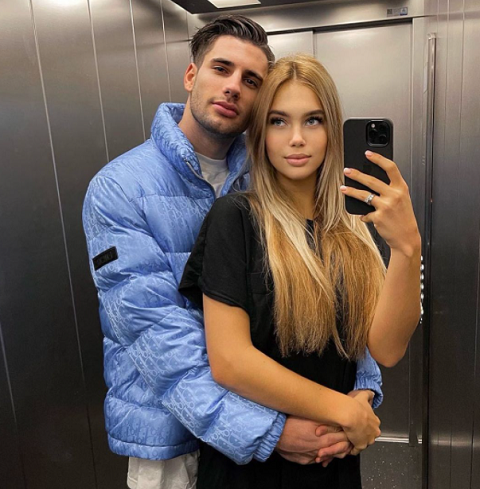 Earlier, the midfielder dated Kata in 2019.

On 21st July 2017, Szoboszlai made his professional debut with the Liefering in the second division against Kapfenberg in In the 2017-18 campaign. On 4th August 2017, he scored his first professional goal against FC Blau-WeiB Linz.

In 2018, he moved to Red Bull Salzburg, making his debut against Austria Wien on 27 May 2018 as a pitch in the 57th-minute substitute for Enock Mwepu. His first goal for the club came in a 6–0 Austrian Cup win against SC Eglo Schwarz.

On 10th June 2020, Szoboszlai scored a hat-trick in a 5-1 win over Stum Graz. He concluded the season giving 27 game appearances with 9 goals which earned him player of the season for 2019–20 in Austrian football's top tier, the Bundesliga.

On 17 December 2020, Szoboszlai signed to the RB Leipzig on a four-and-a-half-year contract. On 7th August 2021, he debuted in a German Cup game against SV Sandhausen, joining the game in the 78th minute and scored three minutes later. On 20th August, he scored his first two goals in Bundesliga in a 4–0 win over VfB Stuttgart.

Szoboszlai has played for the Jugary U17, U19, and U21 national team.

In June 2017, Szoboszlai earned his first call up to the senior Hungary squad for the friendly match against Russia as well as the 2018 FIFA World Cup qualification against Andorra.

On 21st March 2019, he made his international debut in a Euro 2020 qualifier playing against Slovakia, where he entered as a 54th-minute substitute for Laszlo Kleinheisler. In the same UEFA Euro 2020, he scored his first international goal against the opponent in a free-kick at home.

In the 2020–21 UEFA Nations League B against Turkey, he had yet another free-kick where his national side emerged victoriously 1–0 away against Turkey in Sivas.

His third international goal came in the UEFA Euro 2020 qualifying play-offs game against Iceland to send Hungary into Euro 2020. Though he was named to play in the latter, Szoboszlai withdrew injured on 1 June 2021.