Devan Dubnyk is a Canadian professional ice hockey player who plays in the National Hockey League (NHL). As of 2019, Devan Dubnyk currently plays for the Minnesota Wild as their goaltender. Further, Devan Dubnyk has played for other teams like Nashville Predators, and Arizona Coyotes.

As a goaltender, Devan Dubnyk reportedly earns around $4,333,333 as his yearly salary from Minnesota Wild. Further, Devan Dubnyk has an estimated net worth of over $14 million. Additionally, he is married to his lovely wife, Jennifer Dubnyk and shares 3 children with her.

Devan Dubnyk Net Worth and Salary

Some of his career contract  and earnings with bonus and incentives:

As per the reports, Devan Dubnyk is married to his lovely wife Jennifer Dubnyk. Further, the couple were dating for quite a long time and got married in 2015. 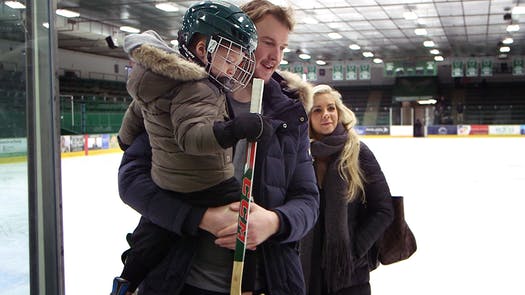 Exploring his social account, the couple shares 3 children together named,  Nathaniel Dubnyk, Dawson Paul Dubnyk, born on Jan 15, 2018, and the details about their third child is not in the media yet.

A day at the Dubnyk house all captured in one picture ?? @davepuente

Further, they seem to love their baby a lot. Despite a busy schedule, Devan Dubnyk manages to give quality time to his family. Further, he has a supportive family member who regularly goes to cheer him in his game.

Devan Dubnyk was born on May 4, 1986, in Regina, Saskatchewan, Canada to parents Barry Dubnyk and Barb Dubnyk. As per his nationality, he is Canadian and belongs to the white ethnic group. Further, his star sign is Taurus. He grew up along with his siblings, Christianne and Dave.

At the end of the 2003–04 season, the Canadian Hockey League (CHL) named Dubnyk the CHL Scholastic Player of the Year as the CHL player "best able to combine success on the ice and in school."

Dubnyk was drafted by the Edmonton Oilers during 2004 offseason at the 2004 NHL Entry Draft in the first round, 14th overall. Dubnyk started his professional career with the ECHL's Stockton Thunder in 2006, compiling a strong record of 24–11–7. His 24 wins, 2.56 GAA and.921 save percentage set club records and he was chosen for the 2006–07 season as an all-star ECHL.

Further, He started playing full-time in 2007–08 for Springfield Falcons, the American Hockey League (AHL) affiliate of Edmonton. Edmonton traded Dubnyk to the Nashville Predators on January 15, 2014. Two days later, on March 5, Dubnyk was again traded to the Canadiens of Montreal in exchange for Nashville's future considerations

On January 15, 2015, Dubnyk was traded in the NHL Entry Draft from struggling Arizona to Minnesota Wild in exchange for a third-round draft pick. Dubnyk was shortlisted for the Vezina Trophy on April 24, along with Montreal's Carey Price and Nashville's Pekka Rinne for the year's goaltender honors.

As an unrestricted free agent, Dubnyk chose to stay with the Wild on July 4, 2015, signing a six-year contract. Similarly, he has represented Team Canada in junior and senior level. Currently, he is playing with his mates Luke Kunin, J.T Brown and many more.