Derek Austin Cornelius is a professional soccer center-back for the Super Lague Greece club Panetolikos. Prior, he played professional football in the Major Soccer League for  Vancouver Whitecaps Fc. Despite having Jamaican and Barbadian ancestry, the footballer plays for the Canadian national team, which is his birth nation.

On Nobember 25, 1997, he was born under the Sagittarius star sign in Ajax, Ontario, Canada. His parents kept his name, Derek Austin Cornelius. Professionally, he is known by the name Derek Cornelius. Further, he possesses an incredible height of 6 ft 2 inches which has been his advantage in his career. The 24-year-old Canada international wears 13 number jersey and is a left-footed player.

Is He Dating Any Girl? Know About His Relationship Status

Instagram handles @dcorneliuss13 has just 49 posts which guide that he is less social. Being a private personality, the former Vancouver Whitecaps center-back kept his love life confidential. Therefore, due to his low-key life, the majority of people have no idea about it. On top of that, there has no record of his past and current relationships. As a result, he is probably unmarried and not dating anyone.

Everything On Derek's Nationality And Family Facts

For your information, Derek is a trio nationality footballer from Jamaica, Canada, and Barbados. Seeking a better life, his family migrated to Canada. Later, he was born there. Due to this, it legally attained its citizenship. Also, his mixed ethnicity family background got him the Jamaica and Barbados nation's card too. 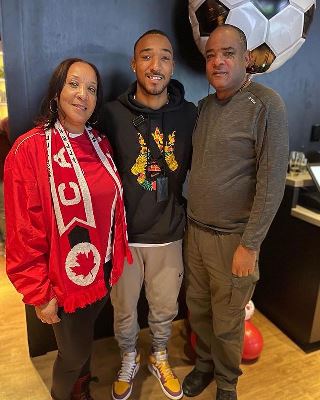 Be noted Derek is the son of a Barbadian father and a Jamaican mother. Along with him, all his family practices the Christian religion. He seems very close to his parents. Undoubtedly, his parent has been his staunchest backers and source of motivation. Also, he has a sister whose details are still unavailable, like his parents.

What's His Annual Salary At Panetolikos?

Derek Cornelius is the third-highest footballer in Panetolikos. Playing for his current club, Derek whopped a weekly pay of £2,400 and an annual of £1,24,800. For your concern, Helder Barbosa tops the number one position with a yearly pay of £1,66,400 at Panetolikos. As of today, there are no verified facts on his net worth. Regardless, as stated by various online sites, it's claimed to be $ 1.5 Million, including all his car, mansion, and bank balance. 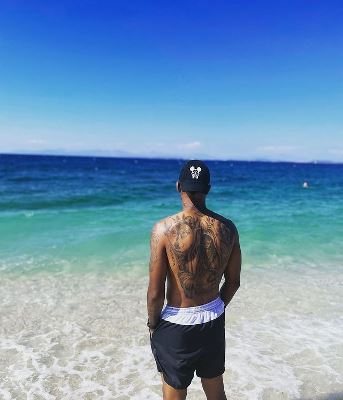 Derek flaunting his tatoo during his summer holiday  SOURCE: Instagram

With his footballing income, he looks after his family. The defender lives a simple and comfortable life. Additionally, he is one of the most explored Canadian footballers. With such fame, many companies and brands are willing to work with him. Hence, it handsomely makes him quite a sum of riches if he works with them. Not to mention, his trending market value is €800 K.