Bijeljina, Bosnia and Herzegovina native, Dejan Joveljic is a Serbian international football player who has been capped 6 times since his debut in 2017. Also, he is currently signed to the German club Eintracht Frankfurt and previously played for Red Star Belgrade (2016-19).

The young Serbian striker who was born on 7 August 1999, started his football career at the tender age of 10 playing for Sloga United. Subsequently, he spent 7 years long passing the whole youth system at Red Star Belgrade before being promoted to the senior team in 2016.

Dejan Joveljic is currently signed to Bundesliga side Eintracht Frankfurt where the salary for a starter is around $49,000 while the top players earn over $2 million. The highest-earning footballers in the team are Sebastian Rode, Nicolai Muller, and Filip Kostic.

Besides his income from the club, he also earns some decent amount from the national team. Additionally, he has an endorsement deal with Adidas. He can be seen promoting the brand posting the photo of his shoes quite often on his Instagram and other social sites. 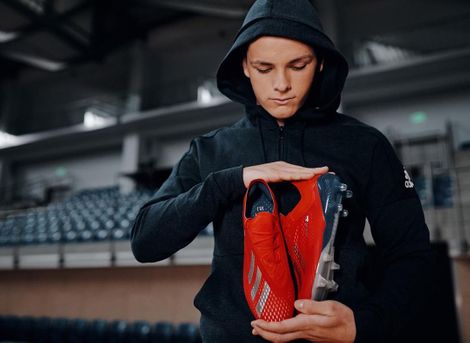 However, the footballer has not openly talked about his financial aspects. Hence the exact figure of his salary and net worth is under review.

Some celebrities flaunt their love life in front of the public while others prefer it as secret as possible. And the twenty years old hunk is among that celebrity who wants his personal life under wrap. To date, there is no news and rumors regarding his love affair or girlfriend.

Though Joveljic has not shared much information about his parents, he often states his family as the best support in his life and career in various interviews.

Besides football, he enjoys playing billiards and chess. Further, he is also the Rubik's Cube enthusiast and has set 39 seconds to set up for his personal record.

On 16 March 2016, he signed his first professional contract with Red Star Belgrade. On 10 December 2017, he made his official debut for the team replacing Aleksandar Pešic in 70 minutes of the Serbian SuperLiga match against Borac Cacak. Overall he played 21 matches and scored 11 goals for Red Star Belgrade.

On 14 June 2019, Joveljic signed a deal with the German side Eintracht Frankfurt for a fee of €4 million.

At the international level, he has represented Serbia U16, U17, U18, U19, and currently playing for the U21 national team.