Dayana Yastremska is a rising Ukrainian Professional tennis player. She has been playing professional matches since 2015. Currently, she is ranked No.103 and was earlier ranked at 21, which is the second-highest ranked player under 21 years. She has won three WTA titles in her four titles finals appearance. Dayana is a junior Grand Slam runner-up in both singles and doubles.

Dayana Yastremska was born Dayana Oleksandrívna Yastremska on May 15, 2000, in Odesa, Ukraine. She is among the two children born to Alexander Yastremsky and his wife, Marina. Her father was a volleyball player and also has served on the Odesa City Council. She has a sister named Ivanna, who is six years younger than her. Her grandmother introduced Ystremaska to tennis at the age of five and has been with it ever since.

She shall be earning much more in the days to come. As a tennis player, The Ukrainian tennis player makes a reasonable sum through her contracts and endorsement deals. Donna Vekic is another famous Crotain tennis player with a net worth of more than $3 Million. 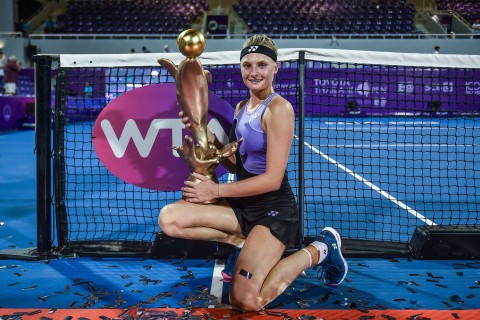 CAPTION: Dayana along with her Thailand Open title SOURCE: Tennis

Dayana had a brand endorsement deal with Nike in her early days. The exact figure about the endorsement deal is not shared with the public. In 2019, She started working with Yonex, which has endorsed her clothing, apparel, and rackets. Like that of her previous contract, there is not much information about the deal with the media.

Is Dayana Dating, Single or Engaged?

Twenty-one years old Tennis player is an active social media user. She keeps posting photos of her on her Instagram account regularly. Following her social media posts, It seems like Dayana is living a single happy life. There is no precise information about Dayana's relationship status. She could be involved in a romantic relationship and could be waiting for the right time to open up about her status.

Rise and Fall in Tennis Career

Dayana has been playing tennis since the age of five. She was the runner-up of the 12-and-under Junior Orange Bowl in 2012. In 2016, She lost the final match of doubles at the Australian Open. She did not have an excellent start to her senior career. She won her first title in the Ladies Open Dunakeszi. She got international recognition in 2018 after qualifying for Wimbledon.

In 2019, Dayana started climbing the ladder of success. She lost her 2019 Australian Open match up against Serena Williams. In early 2020, Yastremska lost the final game of Adelaide International up against Ashleigh Barty. She had a decent year in 2020, and in early 2021, She had tested positive for a metabolite of mesterolone. She has been suspended for the use of anabolic steroids.