Announced for the 2021 NBA Draft, Day'Ron Sharpe is a basketball Center who had a splendid freshman with the North Carolina Tar Heels of the Atlantic Coast Conference (ACC). He finished his high school career at Montverde Academy, having Jordan Brand Classic, Nike Hoop Summit, and McDonald's All American under his belt.

Greenville, North Carolina native, Day'Ron Sharpe was born on 6th November 2001, under the star sign Scorpio. Son of Derrick and Michelle, he grew up alongside one brother and two sisters. He holds an American nationality and is of Afro-American ethnic background. The nineteen years stands 6 ft 11 in (2.11 m) tall and weighs 265 lb (120 kg).

Sharpe is the 7th Tar Heels freshman under coach Roy Williams, entering the 2021 NBA Draft. Nassir Little and Tony Bradley are the brilliant products of Tar Heels shining in the NBA.

He said, "I feel that I'm now ready for the next level. I've made it this far and there's no reason for me to stop now." At 6-foot-11 and 265 pounds, his size, passing, and rebounding ability make him a likely first-round pick.

As per Tankathon, he’s being mocked in the 20’s having him arriving in San Antonio at No. 21 overall.

Considered a five-star recruit, he committed to North Carolina on June 17, 2018, becoming the first member of the class of 2020 to commit to the Tar Heels. on November 25, 2020, he made his freshman debut where he recorded 13 points and 10 rebounds in a 79–60 win against College of Charleston.

The teen basketball star, Sharpe has zipped his mouth when it comes to his love life. He may be dating or maybe not, but his focus, for now, is his ultimate goal, NBA Draft. If Sharpe is in a relationship, he would have flaunted it on his IG but no there is no such love dobby post. 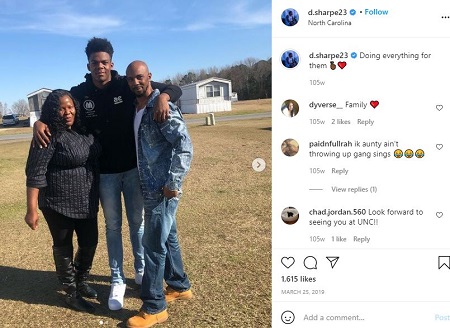 Followed by over 29.2k, he has only shared 11 posts which are mostly from Basketball and one with his parents, which happens to be his first post. Its caption reads "Doing everything for them," yeah, family first.

How Much College Paid Day'Ron Sharpe? (Salary & Net Worth)

College basketball is a billion-dollar business, however, less than 7% of the revenue generated by sports goes to its athletes in the form of scholarships and stipends for living expenses. According to the source, if men's basketball players in the most prestigious conferences split 50% of revenue, each player would be benefited nearly $500,000 per annum.

Though college athletes get no compensation from college, now it allows to be compensated from the use of their names and images, the deals would have to come from a third party.

Since Sharpe has not announced any endorsement and sponsorships, it does not seem he earned it during his collegiate career. As of 2021, his net worth is under review, but once he lands on any NBA franchise, he would earn millions of dollar solely in signing bonus and not to mentions it lucrative salaries.