Dawn Michelle Staley is a basketball player, Hall of Famer and head coach at the University of South Carolina since 2008. She is a three-time Olympic gold medalist and was elected to carry the United States flag at the opening ceremony of the 2004 Summer Olympics.

Staley coached the Temple University Owls women's basketball team in 2010, the team when she was still a WNBA player. During her six years at Temple, she led the program to six NCAA tournaments, four conference tournament titles, and three regular-season conference championships. Staley is also the head coach of the USA National team and was appointed on March 10, 2017.

Dawn Staley has an estimated net worth of $1 million including all of her properties and earnings. She is currently receiving an annual salary of $400,000, as head coach at the University of South Carolina. Further, she was appointed head coach to the United States national team in 2017. No doubt, her salary at the national team is lucrative. 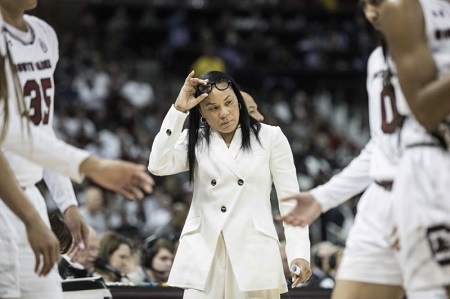 Dawn Staley has an estimated net worth of $1 million SOURCE: Yahoo

On the other hand, during her playing stint, Staley made a five-digit figure per annum as salary.

Staley has reached the age of 49 now. Though she is such a successful basketball player, she has kept her personal and married life secret. She has not revealed any facts about her past affairs, boyfriend or some relationships. She is a good friend of Kristen Ledlow.

She currently heads the Dawn Staley Foundation. This Foundation gives middle-school children a positive influence in their lives by sponsoring an after-school program at the Hank Gathers Recreation Center. She is also writing a four-book series, based on her childhood. She idolizes Michael Jordan as her inspiration.

Dawn Staley was born as Dawn Michelle Staley on 4 May 1970, in Philadelphia, Pennsylvania. Her nationality is American and belongs to the black ethnic background.

She has four siblings.

Daughter of Estelle and Clarence Staley, Dawn Staley attended Murrell Dobbins Tech High School in Philadelphia and was named the high school player of the year during her final season. She then moved to the University of Virginia.

Staley joined the University of Virginia in Charlottesville, Virginia, where she started her career under the head coach Shawn Campbell. Later, Campbell recruited her to play for the Cavaliers at the University of Virginia. She became the starter for the team, averaging 18.5 points per game and helped the team to a 110-21 record, propelling the Cavaliers to four appearances in the NCAA Tournament, which later on led to three consecutive Final Four.

She has earned various awards and honors during her college years. Among her titles was ACC Rookie of the Year, ACC Player of the Year 1991 and 1992, National Player of the Year and Most Outstanding Player of the Final Four All-Tournament. She played professional basketball in France, Italy, Brazil, and Spain after completing graduation. She then joined the Richmond Rage of the American Basketball League in 1996 and led the team to the finals in 1997.

Charlotte Sting then selected her in the 1999 WNBA Draft with the ninth overall pick. She led the Sting to the Championship game of the WNBA playoffs. She joined the Houston Comets on August 1, 2005, where she announced her retirement after the Comets season was over.

At the national level, she has served as an assistant coach for the USA National team in 2006. She also served as an assistant coach in various events including the 2008 Summer Olympic Games in Beijing, China and the 2016 Summer Olympic Games in Rio de Janerio. She led the various team in winning the gold medal many times during her coaching career.