David Rudisha is a well-known Kenyan middle-distance runner. He is the first and only person to ever run 800m under 1:41. Rudisha started his professional career in 2009, competing at the 2009 World Athletics Championships. Rudisha won gold medals in the 2012 and 2016 800 m races.

David RUdisha was born David Lekuta Rudisha on December 17, 1988, in Kilgoris, Narok County, Kenya. He is the son of Daniel Rudisha and Naomi Rudisha. Both of his parents were runners. Rudisha graduated from Kimuron Secondary School. Talking about his physical appearance, Rudisha stands six feet and three inches tall and weighs 76 kg.

Net Worth, Earnings, Salary and Sponsors

David Rudisha has an estimated net worth of more than $200,000. The runner has earned most of his net worth through his prize money and sponsors. David must be making a good amount from his sponsorship and advertising deals with Visa, Adidas and Nike. 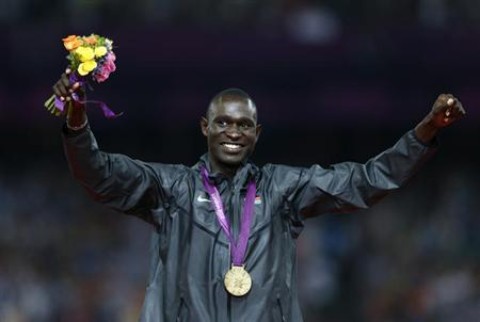 The fastest man on the planet, Usain Bolt, has an estimated net worth of more than $50 Million. His fellow competitor Justin Gatlin has a net worth of $1 Million. David is living a lavish lifestyle through his successful career.

Rudisha is a married man living a happy married life and his wife and children. David exchanged his wedding vows with Lizzy Naanyu in 2010. They had been dating each other for several years before their marriage. Much about their first meeting experience is not shared with the public. David shares a photo with his wife and children SOURCE: [email protected]

David and Lizzy are the proud parents of three daughters. Rudisha is an active social media user and keeps sharing his daughter's photos on his timeline. He is very close to his family and spends his free time with them. There is no rumor of the couple having ups and downs in their married life.

David played several sports in his early days. He started training running while under Brother Colm's tutelage. The runner began preparing for the 400-meter events in his initial days and later shifted towards 800 meters. In 2006, he became the world junior champion held in Beining at the 800-meter race. David won the gold medal at the 2008 African Championships in the 800-meter race. Rudisha competed in the 2009 World Athletics Championships and reached the semi-final. In September 2009, David won the IAAF Grand Prix posting a new African record of 1:42.01. The following year, He won the IAAF World Athlete of the Year Award and was the youngest ever to win the award. In 2012, David won his first major medal at the 2012 Summer Olympics of Gold at the 800-meter events.

In 2016, Rudisha defended his medal in the 800-meter in Rio de Janeiro. The following year, He participated in the Shanghai Diamond League meet and finished fourth. The runner has not participated in any significant event since 2017.